This is a first chapter in my ideas on go theory.

The following choices in this article deserve some motivation:

The chunk of edits on basic strategy, made in September-October 2005, were largely inspired by Minue's Haengma tutorial for beginners. Before that, another major influence has been Benjamin Teuber's essay on Stone Counting Teaching Method.

Your comments on the discussion page are appreciated.

The rules of the game

Rule 0: The purpose of the game

The purpose of the game is to put more stones on the board than your opponent.

In this game end, Black has put down 11 stones on the board. White 10. To understand why empty points remain, one must know the rule of capture (see below).

Rule 1: Placement of the stones 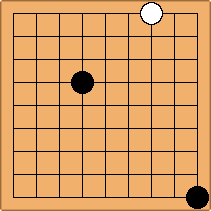 Rule: Stones are placed on the intersections of the board. Once placed, stones cannot be moved. They can only be removed.

Rule: Players take turns. Black starts. A turn consists of either placing a stone or doing nothing, i.e. pass. 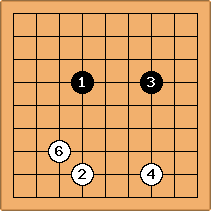 Rule 3: the rule of capture

First concept: liberty of a stone

Definition: A stone's liberties are its empty adjacent points. 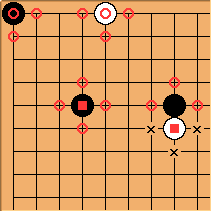 has three liberties, as has the unmarked black stone.

Second concept: A chain and its liberties. 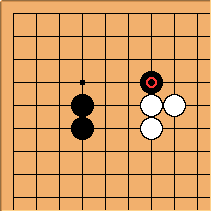 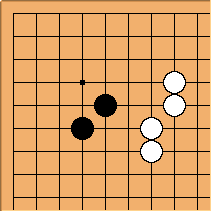 The two black stones do not form a chain. You could say there are two chains of one stone each. The white stones form two chains of two stones.

The rule of capture

There is a rule of capture stating that

Rule: after playing a stone, the opponent stones without liberties are taken off the board. 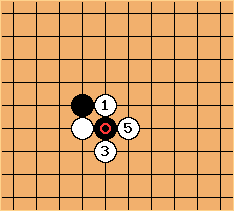 , the marked black stone is captured. The state after

, where the marked stone has only one liberty left, is called atari.

A note on suicide: after applying the rule of capture, if the played stone belongs to a chain with no liberties, this chain is taken off the board. Alternatively, such a play is forbidden. 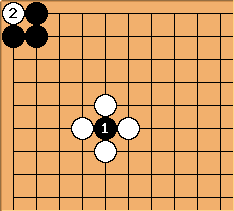 is useless, because the stone remains without liberties, and is made illegal in the rules that most people apply. The same goes for 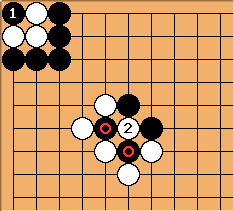 , the three white stones have no liberty and are removed, after which

has liberties. Idem for

: the marked stones are removed and

Rule 4: The rule of forbidden repetition

In some situations, board positions can be infinitely repeated. The ko rule forbids this. However, the game principles dealing with ko are advanced and do not affect the basic ideas of Go.