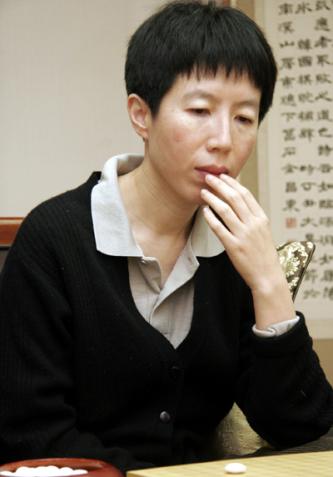 Rui Naiwei (Chinese: 芮乃伟, [1] Hanyu Pinyin: Ruì Nǎiwěi, Korean Hangul: 예내위 RR and M-R: Ye Nae-wi, born December 28, 1963) 9-dan was considered the strongest female player in the world for much of the 1990s and 2000s, and remains one of the top female players today.

Rui left China abruptly in 1989, just after the Tiananmen Square Massacre, moving to Tokyo, Japan where she studied Go as a student of Go Seigen and worked as a go teacher at a life insurance company. However, she was not allowed to enter any of the Japanese professional go association (Nihon Ki-in) and so was unable to play professionally (

reference). Due to not being allowed to play professionally in Japan, she moved to the Bay Area of California, USA.

She married Jiang Zhujiu in 1992, and the same year she also was invited to the quadrennial Ing Cup. Despite that this was Rui's first tournament since she left China, she got through to the semi-finals where she was beaten by Otake Hideo 9-dan of Japan, but not before registering one win against him--to that point the greatest achievement by a female player in the game.

Rui then lived in Korea, participating in the Korean professional tournament circuit where she took, among other titles, the 43rd Open ("Men's") Kuksu title in 1999, thus becoming the first woman to ever hold a major open title.

She has since returned to China where she plays in Chinese and international tournaments.

Together with Jiang Zhujiu she established the American Professional Go Association. She has also occasionally been seen playing on IGS.

Among the books written by Rui Naiwei are

posted on Lifein19x19.com) "Rui Naiwei's persistence was on display: Every Go friend who asked for an autograph received a carefully written "芮迺伟". Regarding the 迺 character, Rui Naiwai was unsure when it started, but at some point reporters began using the character "乃", which is similar in both meaning and sound. She said that this causes problems every time she goes to the post office."