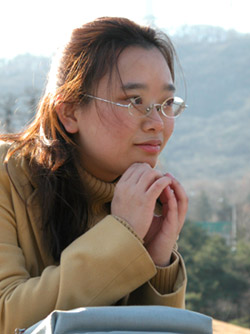 Cho Hye-yeon (조혜연, 趙惠連 b. 7 June 1985 in Suweon City, South Korea) is a Korean, professional 9-dan., She became the fourth female to reach 9-dan. She was a pupil of Kim Weon. Her style has lead to the nickname "The Female Yi Ch'ang-ho."

She became a professional at the age of 11 years and 11 months, making her (at the time) the third youngest professional in Korea (after Cho Hunhyun and Lee Changho). She has very strong religious beliefs which causes her not to compete on Sundays. She has received some amount of criticism from fans in Korea and has had to skip some important matches, such as one game during the World Mind Sports Games.

Aside from her professional go career, Cho Hye-Yeon received a degree in English Literature and Japanese at Korea University and is currently a graduate student in Mass Communication & Public Relations. She learned to play the piano and violin when she was a child; and has learned some amount of Chinese and Spanish. She enjoys creating life and death problems, saying that it "is like drawing," and has published a few life and death books.