Seki, a Japanese go term adopted into English, means mutual life. In its simplest form, it is a sort of symbiosis where two live groups share liberties which neither of them can fill without dying.

Below you will find several types of seki. Be aware that although neither side can 'win' a seki, a seki can be a possible source of ko threats.[1] There are also scoring issues in seki. 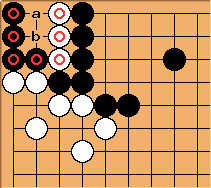 The simplest form of a seki is shown in this diagram: the

groups have no eyes and share two liberties at a and b. If either player plays on one of these points, the opponent will play the other and capture. So neither player will.[2] 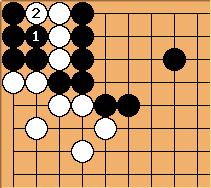 If Black nevertheless plays at

, White will capture the bulky five with

Similar, if White starts at

, Black will capture the farmer's hat at

Though playing first locally fails, it can be used as a big ko threat, losing points however.

Seki with one eye each 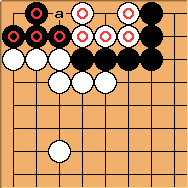 A slightly more complex variant is formed by the marked groups. Both have one eye and they share one liberty (at a). Again, if either player plays at a, the other will capture.

Seki with and without eyes

Both white groups have one eye (at a and b). The black group has none, but shares a liberty with each white group. Again, since no player can capture any stones of the other player, the position is seki.

Seki with one (false) eye

The false eye at b would count in Chinese scoring, but not in Japanese (regardless of being false or not). Stone scoring does not count it either, because White depends on it.

The only play which doesn't immediately lose the corner, is White at a. However, that costs one point in gote (RP: only under Japanese rules), as Black captures at b and White must recreate the original position by recapturing at

. This is an example of sending two returning one.

Also note that under very rare circumstances, in this kind of position White can use the superko rule to capture the black stones in some rulesets. See Rules Beast 1.

is a serious mistake: now White is simply dead.

White shouldn't play at c either: She would put her big group into self-atari, letting Black capture it at

Here b is a real eye. This is no seki since White is able to capture Black.

Both a and b are (false) eyes, which would count in Chinese (and de facto Internet) rules, but not in Japanese scoring (regardless of being false or not). Stone scoring is in-between: It would let White only count one eye (as much she can afford to fill).

Note again that in some rulesets this may not be seki under rare circumstances, depending upon how its superko rule treats sending two returning one.

Another type of seki. Black can capture the three white stones, but if he does, White will come back at

(nakade), leaving Black with a dead shape, so Black won't do so.

Likewise, if White were to try to capture Black, she would at some point need to play another stone inside Black's eye space. However, Black would then happily capture four stones and be left with a live straight-four eye space.

Therefore, neither side wants to play here and this position will remain until the end, with the three white stones and the black group surrounding them alive through seki.

When scored, the black group gets zero points. 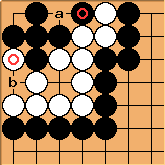 This is an interesting seki involving double ko. If White captures at a, Black will capture at b. Later, if White recaptures at

, returning to the original position. Similar if Black starts.

See double ko and seki with eyes question 1 for more.

Seki with strings in atari 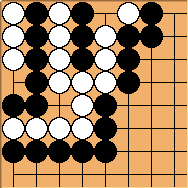 Black has a string in atari, White two, but for either side, capturing starts a capturing race that the other side can win (see hanezeki). Best play is to leave this, therefore it's seki. 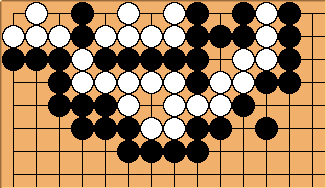 Here is an example of one seki (two eyes versus none) touching another (one eye each). These are effectively neighbouring seki, not one single seki. Being neighbour of a seki isn't being part of it, even if the neighbour happens to be part of another seki itself.

Japanese 1989 Rules do not define seki but define stones to be in seki if they have dame (where, informally, dame are points that aren't inside eyes).

It is possible for players not to fill dame points before passing. However, a pedantic player is pefectly within his rights to demand that any group of his opponent (even if it has 15 eyes) is in seki if it is touching dame, and therefore its territory isn't to be counted. [4]

However, this isn't really important as there is another Japanese rule (9.3) that says, quote,

If a player requests resumption of a stopped game, his opponent must oblige and has the right to play first.

So if your opponent tells you (rightly) that one of your groups is in seki, you can just resume play. Your opponent plays first, but of course can pass.

Time seki (only with time limits)

A time seki arises when neither player can complete a certain capture within their remaining time limit. This can happen when the regulations or conventions require you to pick up the captured stones before hitting the clock. A typical time seki occurs under the following combination of conditions:

This means that neither player will initiate, as they would otherwise lose on time, and thus is a seki. A way of avoiding time sekis is to allow the captor to require their opponent to remove the captives in their own time.

[1] Ko threats for both sides, that is. The interaction with the remove double threats idea is one of the more bizarre corners of go theory, though of little practical importance. Charles Matthews

[2] A recapture under the stones, although something conceivable here, is not possible in this case; it isn't an idea that has much interaction with seki.

[3] Bill: While Charles has a point, the usual assumption that outer stones in a diagram are alive applies. Also, there is a slight inaccuracy. White's outer group does not need two eyes to preserve the seki.

[4] isd: Whether this request would be accepted by a referee has not yet been tested.

RobertJasiek: I could tell something about how it has been tested, etc., but this is off-topic.

isd: What I am asking is has a Japanese referee ever had to make a ruling on this situation. I am not asking about the content of these rules.

RobertJasiek: IIRC, yes, but I do not recall details by heart. Besides, Sakai Takeshi (the major J1989 author) has confirmed this interpretation clearly. He regrets to have created rules with that side-effect but confirms that such are the current rules.