I learned go when I was living in Japan in the late '60s from a friend who was 5 kyu. My girlfriend's father was a 2 dan who gave me 7 stones. After several months I could beat him if I lost only 2 groups. ;-)

I have been 5 dan since September, 1981. Because of rank inflation, that means that my play has deteriorated. These days I play a game or two a month for fun. (Actually, things are picking up. I have had a win-loss ratio of over 5:1 for over 2 years. :-) But that is only among a small group of friends.)

I do research about the endgame and kos, and have discovered a method for evaluating multiple kos, which I have published academically. I am known, I suppose, for precise numerical calculation, but I play mostly by intuition and feel. :-)

I am composing some material aimed at novices about some /basic close patterns and their properties. I am also starting a temporary subpage about /improvement.

/My game with Iwamoto

/Review of All About Ko

25 Oct., 06: I just got back from the fourth International Conference on Baduk, where I delivered a paper on evaluating kos. I met several good people, including John Fairbairn, who gave a presentation on the history of rules changes. Unfortunately, I had bad jet lag, so I slept quite a lot.

18 Dec., '06: I have built a little program I call Zsa-Zsa that plays the capture game. Here is an example: 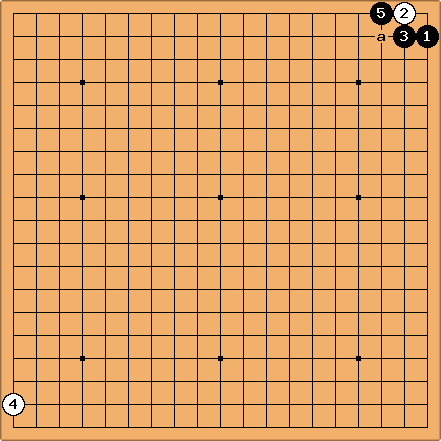 is a good opening for the capture game. Maybe the 2-2 is better.

is a mistake. Black has a geta at a.

are both mistakes. Both should be at a. 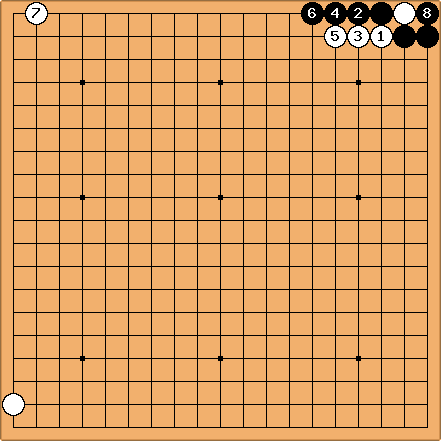 defend instead of finishing White off. But after White plays in a new corner, Black wins the game.

A year or two ago, I asked you for a few clarifications on your Thermography-related pages. Thanks for your gracious responses.

Recently, I've finally found some time to begin some AI coding. It's in very early stages. Anyway, I had forgotten that you also once started a program. Are you still working on it? How's it progressing?

Bill: Well, I tinker from time to time, for fun. I have not done anything for a while though.

pashley: Spight developed a system of classifying moves. The classes are sometimes described as Spightonians.

Blake: By the way, how strong are you these days? Are you still playing seldom? Do you play online? I think those aspects of this page were last updated at least three years ago.

(A while later): I have heard that people are saying that I am "really" a 6-dan. I suppose that I should play as such with a wider group of people and see if that holds up.

AJP: "Since when is Kogo's authoritative?" (BQM186 34PointHighApproachOneSpaceLowPincer) isn't very helpful. Do you have refutations or analysis of the relevant lines on these pages?

Bill: Take a look earlier on the BQM page for my contribution to the analysis. But besides that, if

is so good, how come the pros hardly ever play it? Big corner? Bad aji! On the other page, if the 3-3 attachment is so bad for White, why does it show up in recent pro games so often? Besides, it seems that there have been some improvements for White in that line since the 1970s.

I do not know where the commentary in Kogo's comes from. For copyright reasons, I doubt that it comes from professional commentary. (And if it does it should be cited.) Caveat emptor.

Dieter: To attribute Bill with a dismissing attitude is not entirely fair, I'd say. Check the rest of SL to find other dismissals of his - you may have to wade through cornfields of analysis. I guess Bill wanted to give a warning sign about knowledge bases that are built on reader's contributions. SL should indeed be very careful about citing sources that are not authoritative but instead rely on layman analysis (maybe even kyu!).

jfc: Hear Hear! No body is perfect including Bill. That said, you will be hard pressed to find a more conscientious and rigorous contributor on SL.

One improvement that could be made to SL would be to have an editorial rating system -- experts could rank different pages or passages of pages for accuracy. Any analysis not marked accurate should be taken with a fist full of salt. While it is the duty of the reader to practice an appropriate level of skepticism providing SL mechanisms for tracking peer reviewed contributions would help folks more easily judge the trustworthyness of the source.

Andy is right about my remark. Even though I have been online a long time, I forgot how harsh online comments can seem. I do think that Kogo's is a valuable resource, but, as Dieter kindly explained, I do not think that the commentary is very reliable. I did want to warn people to be skeptical. But my tone was harsher than I intended.

Feb 2009 willemien Hi Bill the link to your home page doesn't work anymore. I hope that you are not angry , that I removed your comment on corner shapes, about the twisted four in the corner (I did change the introductionary to something was better and in line with your comment. )