A liberty is an empty point adjacent (north, south, west, or east) to a stone, shown by a circle in the diagrams on this page. Here,

Stones in a chain share liberties. The black chain here has six liberties. 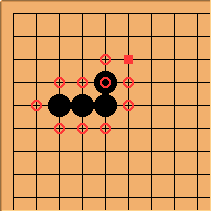 to the point marked with a square - doesn't give rise to liberties. 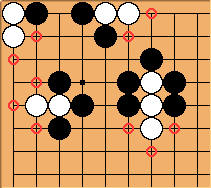 Each of these white chains has more than one liberty; and is safe from direct capture for at least another of Black's moves. 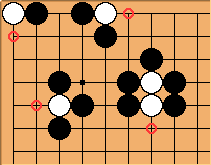 A stone or chain with one liberty is in atari. Each of White's stones or chains in the diagram has a single liberty. They are not yet captured, and remain on the board. They will be captured when their last remaining liberty is filled.

If a stone or chain has no liberties, it is captured and removed from the board. Capture is one of the fundamental ideas of the game. See also rule of capture.

The Japanese word for liberty is dame, although that word has meanings in addition to liberty. The terms freedom or breathing space are also encountered.