The explanation of Territory and Area Scoring is interesting, and I now think I almost understand the difference. 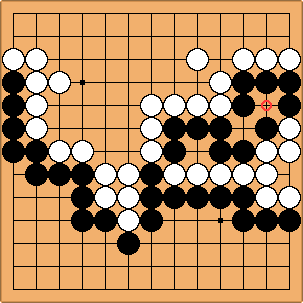 A position similar to this cropped up in one of my recent games. (Except that the game wasn't close, and was decided by resignation, so we didn't have to try to figure this out.) In this example, there are no prisoners, and White played last (both players have put down the same number of stones). Neither Black nor White can approach on the right without putting themselves in atari, so it is seki.

White has an eye, and Black has an eye and a false eye... or is it really false, since White cannot approach the other end?

Bill: If it were not a false eye, White would be dead.

My impression is that this seki scores nothing for either player under Japanese rules (territory scoring), but that both players would get some points for the seki under Chinese rules and other using area scoring. Is this correct?

It is clearly a seki because there is a dame that neither player wants to fill.

Under territory scoring the surrounded empty points in seki are not counted. White wins by 1.

SAS: You mean under Japanese rules (or Korean rules). There are other territory scoring rules (e.g., IGS rules) where points in seki do count.

pfeifrot: My impression is, that under Japanese rules the marked eye counts for black making this game jigo. For this eye is surrounded completely by stones which are not in seki, since they do not possess dame. To qoute the

Bill: The Japanese text is not clear on what possess dame means, but the interpretation in practice is clear, and follows tradition. Neither side gets points in this seki (or any other).

Under area scoring the 3 surrounded empty points in seki are counted (2 for Black, 1 for White), and also the stones in seki (10 for Black, 10 for White). Therefore it is jigo.

TakeNGive interjects -- but there are not the same number of stones in seki, right? I count 12 for Black and 10 for White. Does this mean that Black wins by 2 under area scoring?

Oops, sorry. I shouldn't have subtracted the difference between stones not in seki to compare the number of stones.

Therefore it is jigo.

Ah, now it is clear. Thank you! - TakeNGive

This reminds me of a situation that I once saw where I refused a similar point and my opponent tried to claim it. After several minutes of deliberation and opinions from several other players, we wrestled for it.

At least we got it right, I guess.

anon: However, the important thing to remember is that counting in Chinese rules results in points for the seki. Japanese rules therefore should be consistent with Chinese rules, especially during international matches.