Path: <= All you ever wanted to know about sekis =>
Difficulty: Intermediate   Keywords: Life & Death, Go term

In order for two or more groups to be in seki, the surrounding group(s) must be alive. Therefore, a temporary seki may refer to any of the following three meanings:

When a seki is not temporary in the first or second sense, we say that that it is permanent.

Example of temporary seki in the first sense 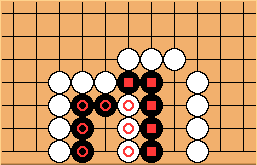 stones appears to be engaged in a seki, however, the

stones are dead. Hence, this seki is said to be false or collapsed. 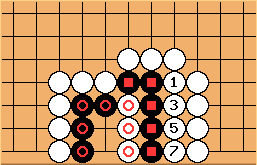 To see why this seki is false, we see that White can play

. Black can do nothing to prevent White from playing these moves and removing the

group off the board. 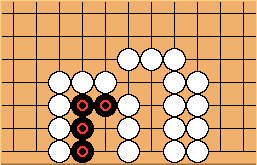 stones taken off, it is now obvious that the remaining

Example of temporary seki in the second sense

groups are currently engaged in a seki, the

stones are not yet unconditionally alive. So there is always a distinct possibility that the

stones get captured later in the game. (A similar comment may be made for the

stones.) We say that this is a temporary seki in the second sense, and this seki may collapse.

Example of temporary seki in the third sense 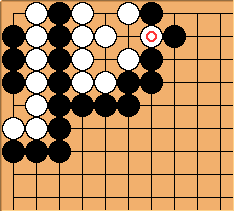 has just taken the ko in the fight to live. Note that there is a seki in the corner. 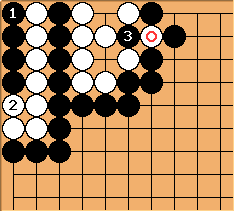 If both Black and White is out of ko-threats elsewhere, Black may choose to play a loss-making threat at

and take the ko at

. In this case, the seki in the corner was only temporary in the third sense.