The analysis of the following strange positions needs some knowledge: you need a mastery of ordinary sekis and the number of liberties in a big eye, so you may want to study those pages first.

For a first challenge, try to solve the following position (it is not a seki; you will find a commentary in

my page about the rules). 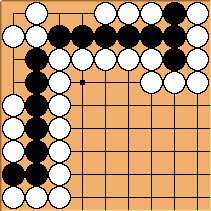 Robert Pauli: Without wart and colours switched, that's the great life-and-death example 4 of the

Robert Pauli: This one is seki (suicide banned).

If you succeeded, this is harder: What is the difference between these two positions?

f3etoiles: I forgot to mention that, many years later, I discovered a new kind of seki based on this configuration:

The reason this one is a complete seki is quite new: Now, if White adds a move she loses at least one group, but if Black fills a liberty, White fills the corresponding one on the other group reverting to the previous position, where White will at her leisure capture first the square bloc, then the T block, and mark 11 points . . .

3 A genuinely new type of seki

Are you still there? Now for something really new: a never seen before type of seki (and it is possible to prove that this is essentially the only one of this type, so you should not really expect to see it in a game sometime - you are probably seeing here a glimpse of go in the 21000th century :-)) 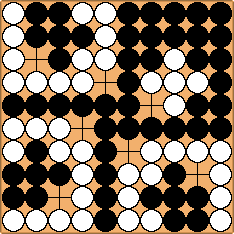 4 Two four-group sekis and a necanism

Robert Pauli: Would you call this one seki, Denis? 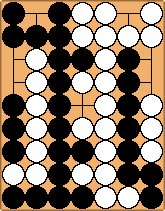 f3etoiles Mmm. I did count, but might be wrong, as I find White still gains a point by breaking the seki (Chinese count, at least the odd result is not so odd :-} > Anyway, if you thought it balanced (no difference in points) I would call it a non-terminal seki, at least . . .

Robert Pauli: Under territory scoring, White gains zero by sacrificing her left side - she ends with 10 points territory and 12 captives, just like Black - but since she loses sente, one might still call it seki.

Bill: By Spight rules with territory scoring this is terminal, but will be played out in the encore for a White win (-1 [the captive Black hands over to balance moves]). By

J89 rules this is seki, but a case can be made for one point without capturing. ;-)

Now for something really strange: an asymmetrical 3-group seki. I can hardly believe it (especially as it was missed for so long), but I cannot find my mistake . . .

To please Robert Pauli, here is a 6×6 version:

Robert Pauli: Thanks, Denis, but this one is smaller, plainer, and more balanced (too bad not one black stone can be reversed):

f3etoiles No, it is correct (well, as far as 4×8 games go), as the last moves could have been, for instance

Robert Pauli: Yes, of course, but balancing without captives is what I like (even if that should lead to an "ugly" rectangular board :-).

BTW, the one with the T (move lower right stone in square to upper left corner) enables a sacrifice! White can trade her small eye to bring life to her big eye:

White drops one into the shared pair, Black too, White takes three, nakade, White takes dead-end four (T), and Black has no time for a second nakade.

On your 6×6 this costs White seven points (territory scoring), on my 4×8 three points, however, some (bad) ruleset might reward White's option somehow in post-end analysis . . .

Move whatever you feel to the discussion page.

f3etoiles Alas, I discovered a few days later that I was completely wrong. What is the real result of this position (it is not a seki)? And, when you will have solved it, what is the Japanese ruling of the following position ? (Hint: there is a strong connection between both :-)) 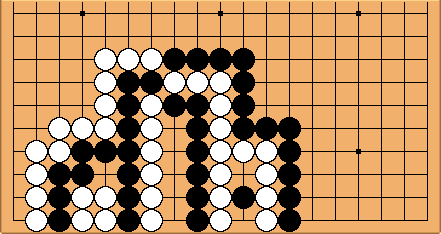 Robert Pauli: Where's the trick, Denis? White can capture the black one-eye group, and Black can capture the white one-eye group - no matter who starts. For whatever reason they didn't, however.
Under Japanese 1989 rules this would be a (technical) seki, due to (five) dame in the center. Worse, even the surrounding stones get infected, since dead stones (the one-eye groups, nothing else) on non-dame are treated as if gone while the disease jumps between stones and space.

Rubyflame: No matter who starts? It sure seems to me that whoever moves first wins.

Now Black's left chain has (four is) five liberties, but White too (at least), plus sente.

Rubyflame: No, White's right chain has only two liberties now. When it is captured, the black group on the left is saved. Your diagram is not equivalent to the one above.

Rubyflame: Here, White should have played at a (at least in the original diagram).

Robert Pauli: Ouch, my simplification indeed is not equivalent to the original. You're completely right, Rubyflame. The one-eye groups are neighbors - who starts, gets it all. A valid shrink might be:

Under Japanese 1989 rules all stones would be dead, but since they're not in territory (in my shrink), to no avail: zero to each. If alive stones of both colors are surrounding, it would be a (technical) seki. If just one color surrounds, my personal interpretation is to have it territory of that color, own dead stones already filled in.

Seki with no common liberties

seki with no common liberties.

The undead bent fours in the corner 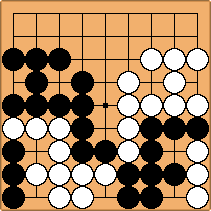 Warp: How about this one? According to my own analysis the corner groups are in seki under all rulesets (including Japanese 1989).

tderz: Source is most probably this excellent

The undead bent fours in the corner, yes because it's the same Warp!

Erik: Here's an interesting seki that I found while analyzing solutions for 4×6 Go. (It is also discussed under unremovable ko, but someone suggested that I should add it to this page.)

Notice that the seki may remain even when both sides are separated by unconditionally alive groups:

f3etoiles In summer 2011, Harry Fearnley, working on variations of the most difficult problem ever, discovered a new type of seki: 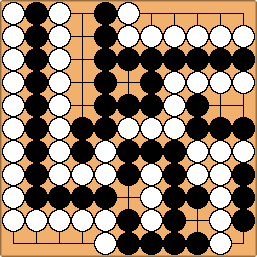 This situation is especially counterintuitive: the main semeai is me-ari me-nashi (one eye vs no eye), but it is nevertheless a complete seki, with 5 unplayable mutual liberties (it is possible to get up to 14 mutual liberties by enlarging the nakades . . .)