Double ko refers to any situation in which a group has two kos, and these determine its status. Groups can live (including life via seki) in double ko, but they can also die in double ko. 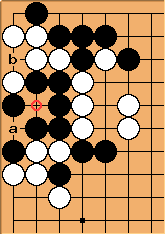 This diagram shows an occurrence of a double ko. (From Large Avalanche Turn Inward). The black group has one liberty (the marked eye) and two kos, giving him always two liberties. If White takes away a liberty by taking the ko at a, Black can take the ko at b. It is then up to White to find a ko threat. Black can answer the ko threat, and when White recaptures b, Black takes a. It is again White who has to play a ko threat, which Black can answer.

It should be clear that White cannot win in this situation - Black is alive in double ko. From the opposing view, White is dead in double ko.

This type of double ko provides the disadvantaged player (in this case, white) with an unlimited number of ko threats, which means he or she is likely to win any other kos that might arise on the board (provided they are smaller in size than the group living by double ko).

Note that in this kind of double ko life, it is necessary that some outside stones (in this case, the white stones at the top) die. It is also necessary that the inside group have an eye.

maxR? Please excuse, if his is the wrong place to ask a question - this is the first comment I write. I can not see why White benefits from the ko-threat, She gets by playing a, since She needs two more threats to save the four stones at the top and return to the starting position. Why should She want to loose two threats to gain one? Please help me to see!

Bill: White does not gain anything locally from taking one of the double kos. The gain comes if there is another ko fight elsewhere. If the threat for White to live here by capturing the Black stones is big enough -- and it is big --, then White can take one of the kos here as a ko threat for the other ko and Black will answer here, and then White can take the other ko back. Then the next time that White needs a ko threat, she still has a ko threat here. In effect, White has an infinite number of ko threats here. (OC, it is possible to construct positions where things are not so simple, but that is the general idea.)

maxR?: Hello Bill, thank You for Your explanation, now I think I understand the idea. So let's say Black takes a ko elsewhere. White takes a and forces Black to take b for not loosing the Group. Now White can take the other ko back, which was Her intention from the beginning. But what keeps Black from playing 1-1 now and capture the four white stones, leaving a twisted four shape which White can not easily kill? Is it, that White expects Black to play a threat somewhere else to be able to take the ko elsewhere again?

Slarty: Black could spend one or two moves to remove the four stones, but those moves don't make any new points, only remove white's source of ko threats. Black might decide to do that but of course that a kind of victory for White. Otherwise Black would be expected to play elsewhere because the third ko is unwinnable without sacrificing this group.

maxR?: So that's the point I did not consider: the four stones are dead and capturing them will not bring any points. Now it makes sense, White realy has a new threat immediately and I can sleep well again, thank You. 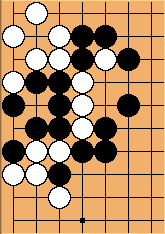 Here the double ko will normally be resolved into a single (two stage) ko, but the White stones that need to die are not part of any ko shape. 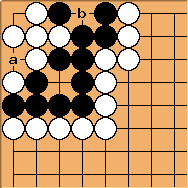 This is a double ko seki. If Black takes at a White takes at b, and vice versa. Then the first player to take cannot continue locally.

An interesting feature of double ko sekis is that they supply both players with an infinite number of unremovable ko threats. If another ko arises elsewhere on the board, the game will end in triple ko if neither player is willing to give something up. This can allow an otherwise dead group to stay on the board; see moonshine life. 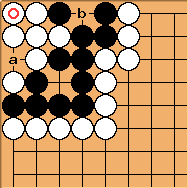 Alternatively, if we remove the eye, white is also dead, but now with ko threats: taking one of the kos threatens to kill the black group. (Conversely, one could say that in this diagram, black is alive in double ko.) 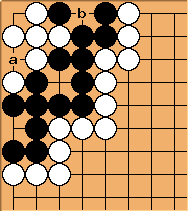 If the outside group is unconditionally alive, white is dead. There are no ko threats for anyone in this situation. Since a white ko capture is not sente, this is not a double ko.

Like in the previous diagram, the white strings are dead. It is not a double ko because a white ko capture is not sente. 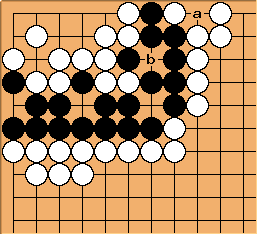 This black group is involved in a number of kos, but they don't affect its status. Black cannot live by "winning" any or all of the kos. Black has only false eyes and simply dead.

Bill Fraser discovered this double ko. Note that the double ko does not affect the status of any group.

In this artificially constructed example, both the

chain are connected to their respective outside stones via a common double ko. Neither of the marked chains can be captured, unless one side neglects to recapture `their' KO.

These problems involve double ko. This does not necessarily mean that the solution is double, but can also mean that some attempts fail because of double ko.

In a double ko life situation such as the first diagram on this page, Ing rules may only allow the disadvantaged side to use it as a ko threat twice. See Ing Ko Rules and Disturbing Ko.