Path: <= All you ever wanted to know about sekis =>
Difficulty: Beginner   Keywords: Life & Death, Go term

this Chinese site. After 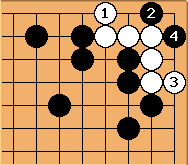 Yes, a dead bent four in the corner is a false seki. 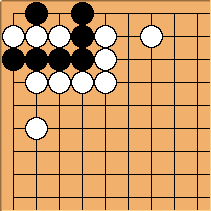 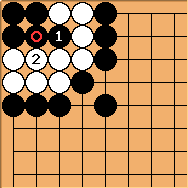 This false seki actually happened in the upper left corner of a very large board of size, hold your breath, 38×38 (

SGF with 1001 moves :-). Black was erroneously not declared dead, but it didnt matter anyway. — RP

Bass: To me these three final diagrams do not seem like examples of false seki. They are plainly dead (well talk about the bent four later ;-) ) and I do not think there is any need for a term that means dead, but somebody once misread it as seki. However, the first diagram displays a proper false seki, where there are groups that are locally in a seki, which will however collapse because some of the surrounding stones will get killed. In my opinion, this is a much more useful meaning for the term.

Googleplex?: I agree - in the last two examples it is possible for the target colour to make life.

W would play circle instead of 2 in the last example and in the previous one, black is able to make two columns of two, each as good as an eye.

MrTenuki: I think the reason that the last example is listed here is that the situation is similar to real sekis in one way: if either Black or White plays a stone locally, the other player may capture. What makes the seki false in this case, then, is the fact that, for White, capturing after Black plays a stone locally still does NOT make life (while Black may save the four stones if White plays locally first).

Zar?: We mention that a group is dead with a false eye, dont we? I could argue that the group is simply dead and that is simply not an eye. Consider it an educational term. The first examples just dead as well in my opinion.

Patrick Traill: Since a Chinese translation is given, this page should presumably reflect the usage of that expression in China. I am inclined to agree with Zar? that this term is no less useful than false eye.