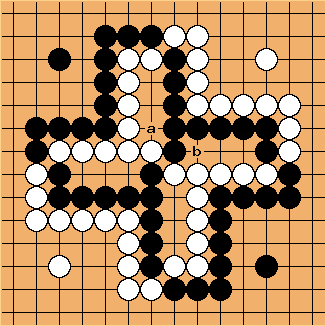 If Black plays on a, White answers on b and Black loses the capturing race.

I don't know whether this is a classic strange position or not. It doesn't seem likely that such things could appear in real games. I stumbled across it years ago while trying to construct an algorithmic definition of seki. (It convinced me to work on something easier.:-) I think it's interesting as a suggestion of how to create sekiish positions with arbitrarily large numbers of shared liberties. — WilliamNewman 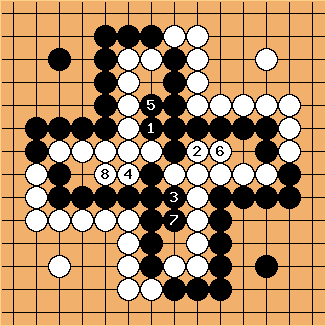 I think the correct way to continue is this, resulting in an "ordinary" seki. Weird position, though. --Dansc I don't see why that move

? After that, the upper right black group has only three liberties, while the white groups have four liberties each, so it seems as though black should lose the capturing race. -- WilliamNewman 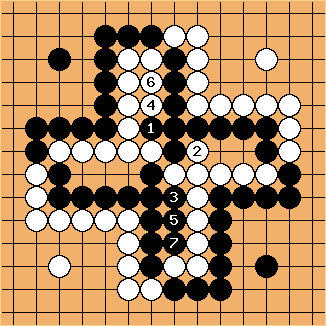 Bill: Nope, but he does lose sente.

WilliamNewman: I have since found somewhat similar shapes

Path: <= All you ever wanted to know about sekis =>
A pathological seki last edited by PJTraill on January 31, 2019 - 21:32
RecentChanges · StartingPoints · About
Edit page ·Search · Related · Page info · Latest diff