Solution for seki in general

Japanese 2003 Rules / version 35a. Then use the following citation:

Definition: A group is either a black-group or a white-group.

Note: For other purposes one might want to define group differently.

Definition: An in-seki-space is a dame and, recursively, any adjacent dame or any adjacent intersection of an in-seki region.

Definition: A seki is the union of all strings of an in-seki-space."

Note: One can argue that there are Matti Siivola's

other non-independently-alive groups without a dame that are seki-like. The definition above does not include them.

All simple sekis are some subset of all sekis. 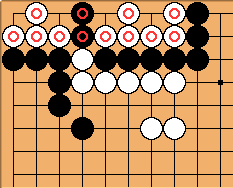 (TapaniRaiko: The proposal is not enough, as these two examples show. I have seen an example where a 35x35 board was filled with small groups all living in a single seki.)

How about something along the lines of:

"A local position with at least one mutual liberty or single point ko which cannot be filled by either side without incurring a loss." We still have to read out the consequences of moves, but I think this captures what we mean by Seki and applies to all the examples there.

jvt: This is still ambiguous: how to define which chains belong to the 'local position'? Some chains may be in seki even if they are not adjacent to any dame.

RobertJasiek: Needless to say, the Japanese 2003 Rules will provide an unequivocal definition of "seki" under those rules. For other rules, minor modifications would be necessary then.

KjeldPetersen: If a group (with max 1 eye) is moving out (not filling the eye) and thereby get into a position of atari, then this group is posible part of a seki? Look at the example at the top. All three groups will go into atari if they move out.

Chris: The definitions given here are a bit naive. For all of them it is not very difficult to come up with couter-examples. I don't think an attempt to define seki by the possible shapes that are seki will succeed. A position is a seki because of the possible sequences in the position, not because it has a particular shape. Hence, it is probably impossible to define seki without referring to a search. For computer-go it is important to know what is seki. I wrote a seki-recognizer that I hope is not too inaccurare. Here is more info.

Michael?: A definition based on game theory. A seki is any position which locally has a value of *.

Superdave: No, star means unsettled--whoever moves first wins the local position. 0 is the CGT value that means whoever goes first loses, which would be a better analogy for a seki, except that CGT models games where you are not allowed to pass.

Michael?: Ah, you're right, it's been a while since I read winning ways.