Opening pattern along one side in which Black's third [3] move (move 5,

in the diagram) creates an enclosure from a 4-3 point, in ideal relation with a 3-4 point in the other corner. S 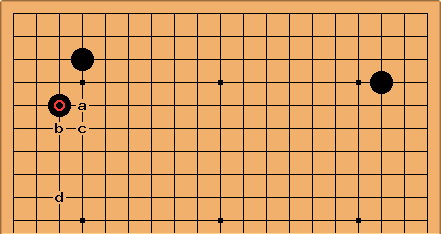 Black plays at the marked point to create a good territorial formation. This opening became very popular in the first decade of komi Go.[4]

is) was less routinely played to prevent it (the Shusaku fuseki became less important for White taking komi); and because of experience with earlier use of the enclosure at a. That is still played, and enclosures at b and c are also tried occasionally. In the modern style Black will sometimes now play at d.[1][2] 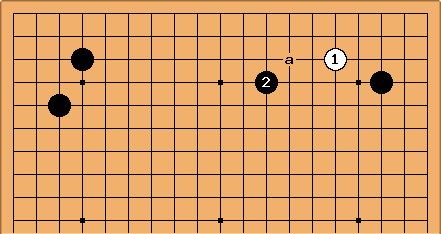 When White approaches low in the right-hand corner,

became the orthodox choice of pincer, though all types of pincers were tried over hundreds of high-level games. Later Kobayashi Koichi adopted this pattern, with Black playing the pincer at a. 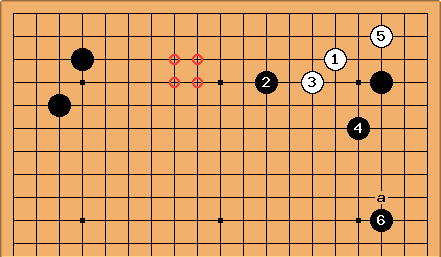 may be held back to a). White lives in sente. Now the area of the marked points becomes important. 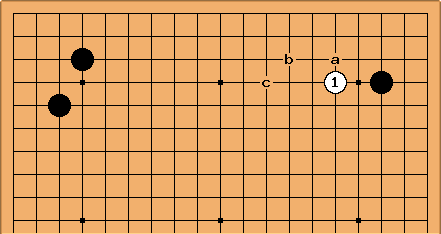 When White makes the high approach here, Black at a is the usual play. The pincer at b will turn out well for White if the correct variation is chosen (on the page about the attachment response to this pincer apply the ladder-dependent variation in 1.1.1) (this reference isn't clear). The pincer at c is played sometimes in high-level games, but Black must seek complications to gain advantage from it. 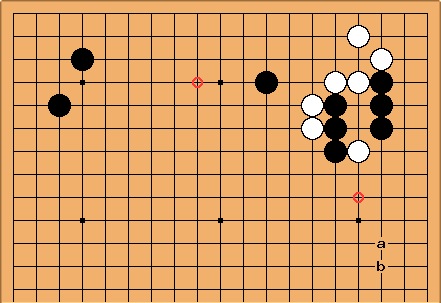 This is the position after the main variation of the pincer at ''c''. White ends in gote but can regard plays in the directions of the two marked points as being nearly miai for a follow-up.

While technically White can be said to end in gote, in actual professional practice, this is not usually the case when the lower right corner is controlled by White (as it normally is, here). Black almost always extends down the right side for the next play, usually at a or b. As a result, White has a pretty strong expectation of being able to play next along the top when choosing this joseki. -- Dave Sigaty

Yes, assuming a white 4-4 point in the lower right, as we're looking at it, Black next at b is recommended (if I recall correctly) by Go Seigen and Yang Yilun; while Black at a is also played. In a sense we should read this backwards: taking into account White's formation, Black should anticipate this standard outcome when playing the initial pincer. If White had a 3-3 point lower right, Black would perhaps be less worried about a fight on the right side. Charles Matthews 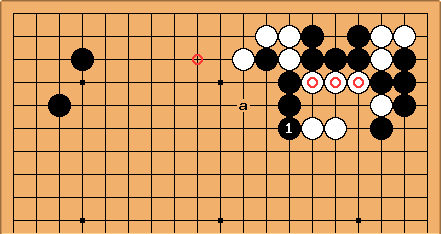 The nadare has been tried many times by pros. An interesting idea (Cho Chikun in 1972) in the application of the traditional ''onadare'' main line was to replace a by

here. Black is aiming at an attack at the marked point, to make good use of his enclosure. The variations become complex, with White sometimes sacrificing the

stones to escape shortage of liberties caused by the bamboo joint. 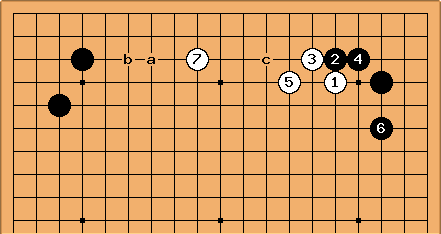 The classic pattern here is, however, with this standard joseki. Black takes sente, having secured both corners. Black at a is a checking extension setting up an invasion at c, which is therefore very big; Black at a or White at b will be played soon. 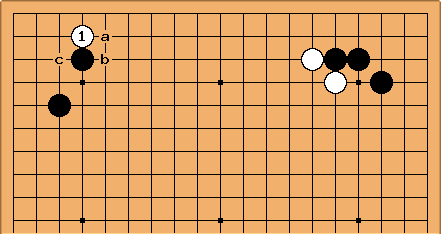 as a probe in Black's enclosure. This has been seen in numerous games.

chrisg I found this in Kombilo whilst playing through an old game of mine, and was quite surprised by it. The continuations I found had continuations with 'a' through 'c' marked, 'a' seemed to end up in a sequence with a ladder to the bottom right, where B plays a ladder breaker, 'b' seemed to revert to the standard fuseki, with the exception of the exchange. I can't really say much about 'c' though. 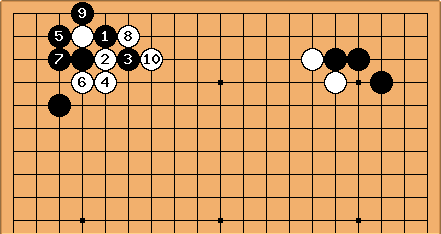 Here is the variation that ends in a ladder, starting at 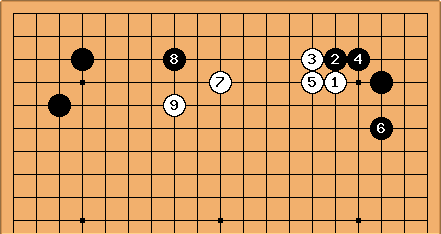 here, and extending on the fourth line. This assumes White's nirensei on the other side of the board.

Bill: Does it make that assumption? 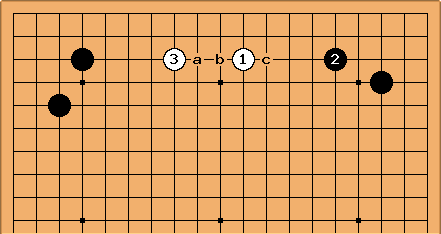 An idea from Kitani Minoru in the late 1950s is for White to play a wedge on the side instead. White 1 is the point chosen in pro games: none of a, b or c is seen. After

, White has the minimum external pressure from Black's corner formations. If Black played

at a White would be happy to answer at

This way of playing has been adopted from time to time by top players, so is presumably reasonable considering komi, to simplify the game.

Much less common are the enclosure opening-style sides based on enclosures using the 3-5 point. These are discussed on the 3554 enclosure, 3555 enclosure and 3564 enclosure pages.

The analogues for 4-4 point, 3-3 point and 5-4 point enclosures of this side pattern are all rare: enclosing the right corner would normally take priority.

Bill: What about those openings where Black's second move is an enclosure? They are enclosure openings, too.

It does tend though to become a tasuki fuseki: often enough it can transpose into the regulation fuseki or the analogue with a 4-3 point not a 3-4 point lower left. In fact I guess it became popular mainly because Black expected to play

lower left and wanted to see

before choosing how to occupy the corner (that is,

Bill: According to Takagawa, the enclosure of the top right corner with

was a common response when

was not the facing 3-4 point in the top left corner.

Charles If it is the 4-3 point, rather, then

in the lower right at 3-4 is interesting for White, I think. 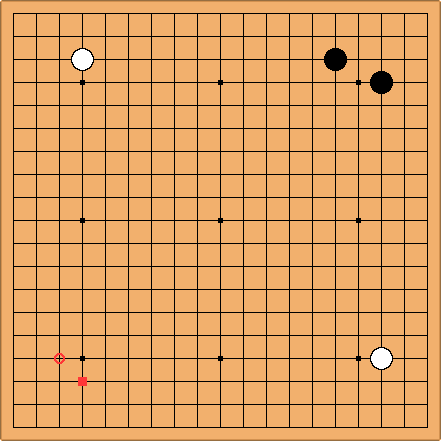 Given the theory of the time, I think White might have felt she's achieved something already here. That is, Black at either of the circle or square points is playing into an opposite komoku. Which (to this day, it seems) pros avoid.

Therefore Black would presumably play takamoku or mokuhazushi lower left (at that time); and White doesn't feel so far behind on territory.

larsen: Well, I suppose Black can do quite well playing a straightforward hoshi in the given position. It makes miai of approaching either komoku, and the high approach supported by hoshi tends to be quite pleasant to play.

Just a fuseki by-way. But the old guys put a huge effort into these nuances - something one picks up.

[4] The board has been rotated 90 degrees counter clockwise for convenience.