A checking extension is

This 'added value' of the first definition may take a number of forms, for example an implied invasion, a threat to the base of a group or preventing an opponent's extension in a particular direction. 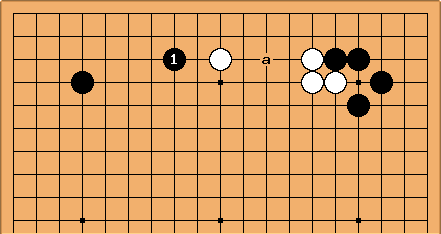 aims at an invasion next at a. 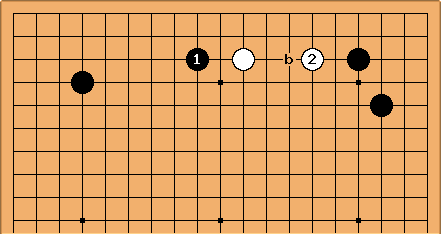 In this case White's response to

is entirely natural: allowing Black the big, attacking play at b would be a major loss.

Both of these are examples of checking extensions by Black. In the second case we can assume Black's play is sente; but not in the first. To qualify an extension must at least be 'almost sente', in the sense of having a major follow-up.

[2] A more detailed definition is given in Joseki Volume 1 Fundamentals, where too near stones are excluded, i.e., a checking extension must not be confused with a block or move of the type connection (such as string connection or kosumi).

RobertJasiek: Outside SL, the second definition is the only one I have - consistently so - seen used verbally or in English or German literature for checking extension. The "added value" then becomes "to prevent an opponent's extension in a particular direction". Every example confirms this.