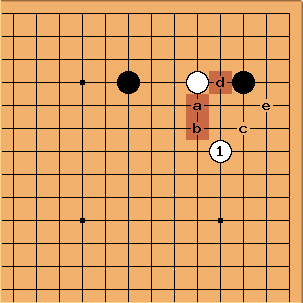 here was invented by Fujisawa Kuranosuke. The most common continuation is at a, which will be further discussed on this page. There is also: 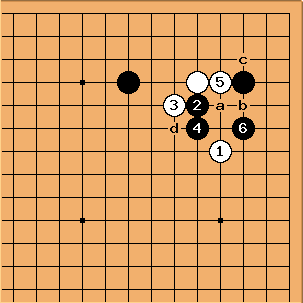 There is also Cho Chikun's variation where White plays

at c and Hashimoto Shoji's variation where Black plays 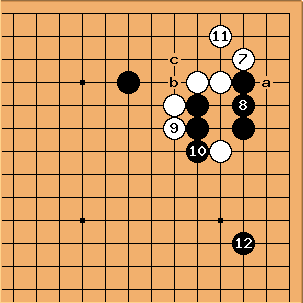 The normal moves are as shown here, completing the joseki. For a while the relative timing of the

exchanges was considered a critical issue[1],

at a is a variant which is stronger in the corner, but is no longer played; the same holds for white forsaking the

exchange and living with c. The exchange of

is a loss for White, as it greatly weakens the aji of his solitary stone, but it means that

indirectly covers the cutting point at b.

is of course not played if Black already has a stone in the area. 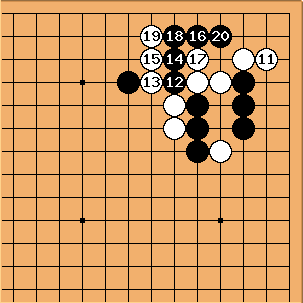 in the previous line can here instead, provided the ladder works for White. The first time it appeared (perhaps) was in a game between Miyazawa Goro and Ishikura Noboru. Can the latter therefore be considered to have invented the variation ? 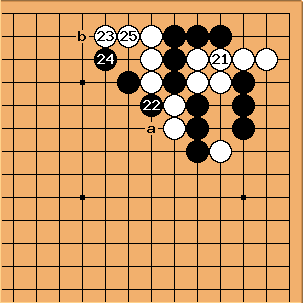 There are two issues in this joseki:

kokiri: also played by Nie weiping and discussed in his (unfairly criticised IMO) Nie Weiping On Go but in that example he used it to build a (black) position down the side. 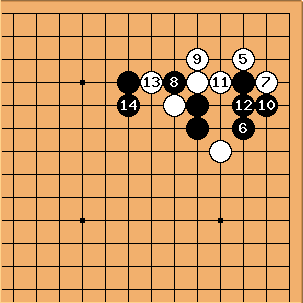 is a modern variant of the joseki, known as Cho Chikun's variation. The variation shown here is currently most played, but there are several other, see the link. 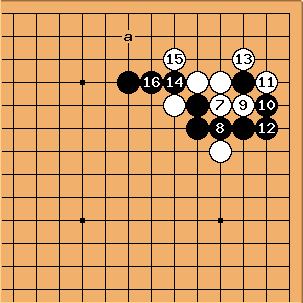 was long considered vulgar, but after AlphaGo seemed happy to play it, it is since considered joseki. The major turning point in this joseki is at

. In this variation, black builds a strong wall, but white gets solid territory in the corner. White can continue at a to avoid being completely shut in, or play tenuki to counter the thickness black has built up. 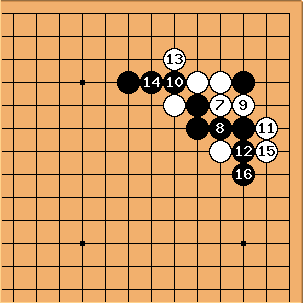 If black does not want the result in the previous diagram, he can cut at

immediately. Black's thickness on the right side is less than before, but there is considerable aji left in the corner. The 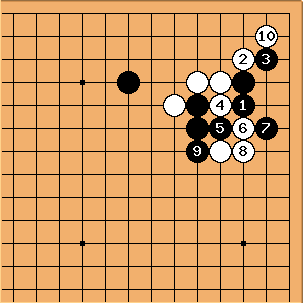 is sometimes played, though much less than the main variation at

. Play often reverts to the normal joseki through White

, but either player can convert to this variation (black by playing

here, white by pushing in at

). What is shown here is one possible continuation. 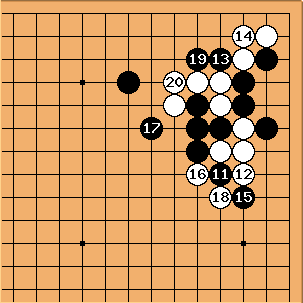 Both players put pressure on the right side, and it seems that White is winning there with

shows that Black has other plans. 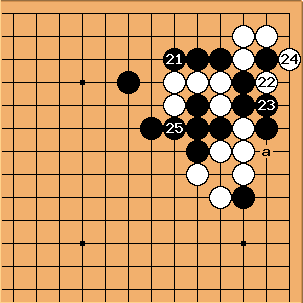 Black captures five White stones, but White has two redeeming features. First and most importantly, she has sente, so Black has played a stone more in this corner, making his profit look actually quite small. Secondly, if she would get into trouble at the right side, there is always the option to connect with the corner starting at a.

Imagist I'm skeptical of this as joseki--there are a few spots in this where white simply plays at a in the diagram above and I can't find a way that B doesn't simply come up short on liberties. 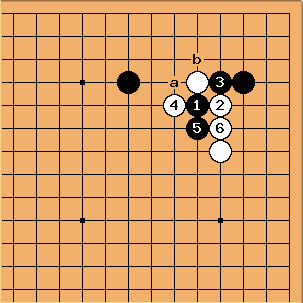 is not good for White. If the ladder works for Black, he can cut at a to annihilate White. If not, he crosses under at b to give the following result. 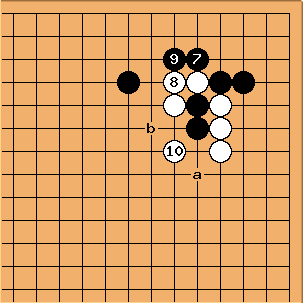 This result is comparable to the one in Hashimoto Shoji's variation but it is worse. White's influence is diminished by the gaps at a and b. 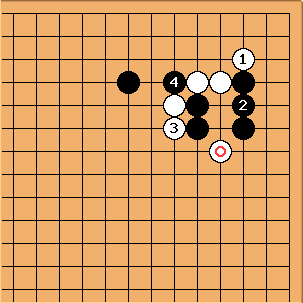 This is a possible critical line for the supposed timing issue.

is natural, simply because

is locally a bad play, weakening the marked white stone (it is only played at all to strengthen White's cutting point). The question is, what if Black now plays

to cut, the shape to the right having been fixed by 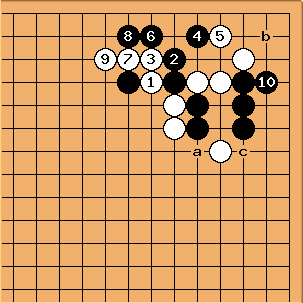 After these plays and White a, Black b, White c, White has died inside and has much influence outside. 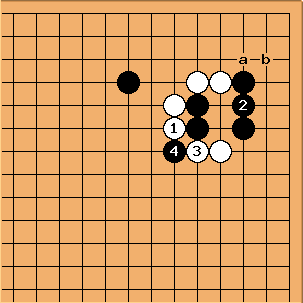 Another possible critical line occurs when White pushes in the centre first, as here; and Black makes the bamboo joint

to thwart White's later play in the corner (now if White a, Black b and White has less eye shape). That invites

and induces the cut

This was played in a Korean game (Seo Neung-uk vs. Cheong Su-hyeon 1990-12-07); variations are given in Jungsuk in Our Time. 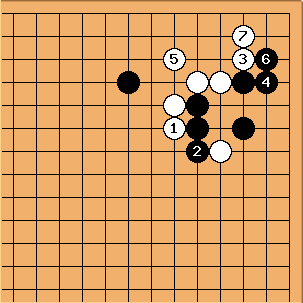 Another reason why White does not play at

first is shown here. An old variation of the joseki has Black answer

, after which the moves to

follow. On itself this variation is now rejected for black, but it makes the

exchange even worse for White. 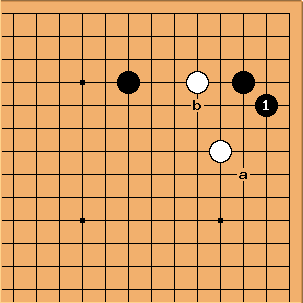 is a novel answer to the ogeima. a and b are now miai.