The Shusaku opening (aka Shusaku fuseki) is a whole-board opening strategy for Black that was developed and popularized in the mid-19th century by Honinbo Shusaku. The goal of the opening was to maintain the initiative of Black's first move through a systematic order of moves during an era before komi. Although the layout had been played before Shusaku's time, it was Shusaku who developed it into a successful, formalized opening strategy. It soon became the most popular opening for Black from the 1850s-1930s. Several counter-strategies were attempted and developed for White, including reappraisal or renewed interest in the 4-4 and 5-4 opening moves. The opening went through many iterations as komi was slowly increased during the 20th century, and inspired many players to attempt to find other such holistic, opening strategies, such as the Chinese opening, Kobayashi opening, and mini-Chinese opening. Today, certain variations of the Shusaku opening make occasional appearances in professional games, while others are no longer considered viable for various reasons. 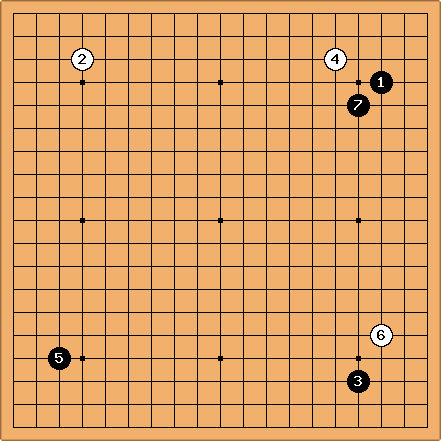 The base form of the Shusaku opening is made by moves

, and the kosumi of

as an approach move allowed

in the last open corner. During Shusaku's time it was considered appropriate for White to approach the Black corners rather than take the last empty corner. This was because White wanted a more active game due to the lack of komi. Allowing the game to evolve into a parallel fuseki that allowed Black to make a corner enclosure was considered too easy for Black. This feature of play in, and prior to, Shusaku's time is what allowed the Shusaku opening to flourish. 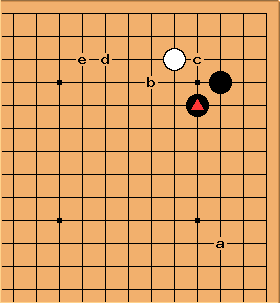 became famously known as the Shusaku kosumi. The innate strength of the kosumi shape and variety of followups and replies -- 'a' to 'e' -- provided Black with a solid group and flexible toolkit that worked proactively with the rest of the board. 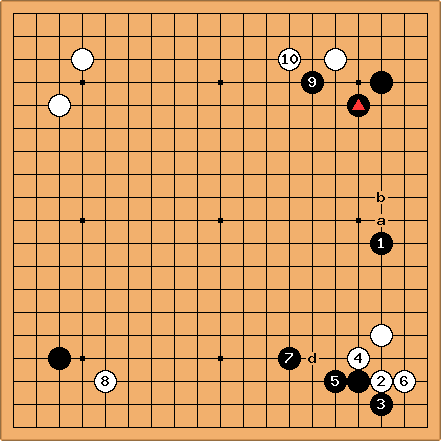 (innovated by Honinbo Dosaku) followed by the fencing technique of

. Together they provided an ideal extension from Black's top group, an ideal pincer on the bottom-right White stone, and the beginnings of a small moyo on the right. Even to players of Shusaku's time the strategy was clear, and so White quickly sought moves to avoid this situation. The result for Black was the development of the flexible toolkit mentioned above; and locally for White were the responses of White @

This back-and-forth happened all the way until the early 1930s when the shin-fuseki period began. At this point the Shusaku opening was still the most played opening as Black, but many of the younger players were experimenting with new shin-fuseki openings for both White and Black. After the period settled a balance was struck between the new and old ideas, but this didn't last long as komi was introduced en-mass in the 1940s. The result of these two factors lead to the displacement of the Shusaku kosumi in favor of new high pincers, particularly the two-space high pincer. So while the base of

remained, the other famous element -- the kosumi -- did not.

The continued increase in the value of komi also lead to the decrease in playing of the Shusaku opening as new josekies and openings increased. In contemporary komi games, the Shusaku kosumi is now viewed as too slow for Black, while oppositely viewed as playable for White. As a result, the kosumi has seen steady play as White since the early 2000s, but since it is not played within the context of Shusaku opening the meaning of it is slightly different. The Shusaku opening of

is fairly rare to see in contemporary, professional go primarily because White no longer feels obligated to first approach Black's corner stones before taking the last empty corner; while

plus the Shusaku kosumi (of

Takemiya kosumi - A move in modern play that looks like the Shusaku kosumi, but is used with the 4-4 stone and has different intent.