Black 3 is an enclosure 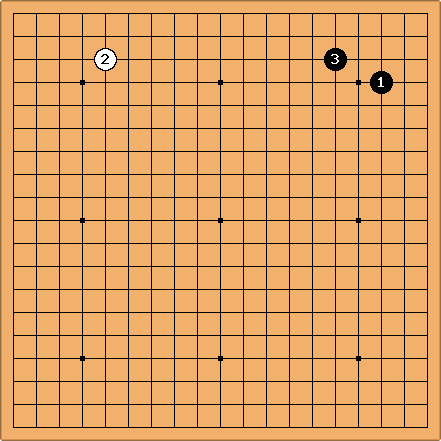 played to enclose the corner occupied with

is an old idea from Edo period games. In fact it seems that this was the second opening pattern, after the regulation fuseki, to be recognised as having an individual character, from around 1820 and ahead of the Shusaku fuseki.[1]

White is now presumed to play in the lower right corner. Kajiwara has criticised that, with what support from others it isn't clear.

in the lower left for a diagonal fuseki pattern. The advantage to Black is that Black sees White's play in both adjacent corners, before committing to a choice there. Considering White's full range of orthodox corner options, you could say that there are as many as 100 patterns up to

, illustrating the richness of traditional fuseki.

This type of opening, with a small high enclosure by Black, was quite standard in the first three decades of the twentieth century. After the introduction of komi it was less popular, but it was much played by Hashimoto Utaro.

Hyperpape: John Fairbairn has noted that the immediate enclosure was also an important part of the very active development of theory in the 1920s, prior to Shin Fuseki.

[1] Bill: The enclosure was usual when White did not play the regulation fuseki. 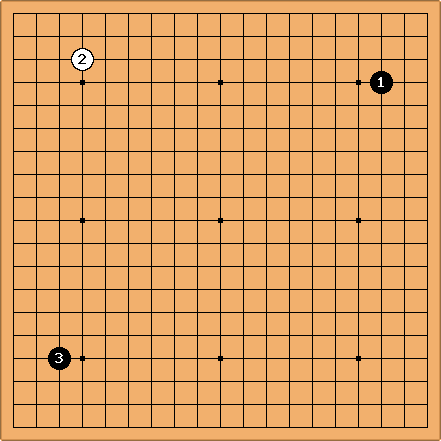 was considered good in relation to

was considered good in relation to

. But if White played on a different point in the top left corner, Black would not have such a good move in the bottom left corner, according to the thinking of the day, and the enclosure was a solid move that left the bottom corners miai.