Charles Matthews Where does it all lead? I suppose it is of some general interest to ask that, assuming that the answer can be given on the side of study and understanding, not simply in the terms 'ever more games played'.

I'd like to propose a model of go study in several levels, from introductory to advanced, starting like this:

This moves from the familiar to the less so. Level 2 is standard for single-figure kyu players: wrestle with joseki and shape, influence and aji, until it all starts to make some sense.

Level 3 hits amateur dan levels. There are quite a number of examples of 'lessons' in the intended sense on SL: for example the 3-6 point pincers page would be one, bringing together an easy pattern and a basic concept (shut in). Such lessons may not be stated in the mainstream go literature. Using the pattern language analogy, though, they are typical didactic comments on practical play, well within 'theory'. They quite likely 'answer a question with a question'.

Another example is about this enclosure opening formation: 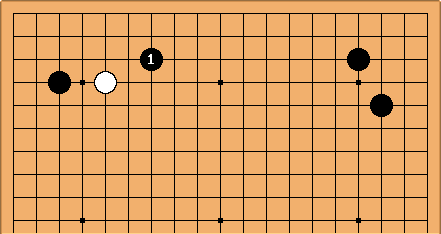 In this case White should know about joseki choice here, and that depends on a ladder question.

What is this 'stories', then? As a complementary concept, it should handle aspects of the flow of the game, rather than single 'points'. Who is in the lead, for example, and what that means. Whatever comes next, it should see lesson and story combined in some way: just as pattern in go grows out of the vital point concept common to problems and proverbs (level 1).

To sort out Level 3, therefore, one need some idea on what Level 4 would be - something like amateur 5 dan material. I'm going to put this as

Some explanation. Here 'break' is used as a better term for middlegame joseki, an unsatisfactory working concept. I was once talking to an expert on Dutch painting about a picture of a young girl holding a pretzel. He told me that the symbolism was this: just as it is impossible to predict exactly the way the pretzel will break, so it is uncertain how a young person's life will work out. I think there is something closely analogous to this in the middle game of go: the lines of 'middlegame joseki' are far from being railway lines. They incorporate context, and other 'story' elements such as positional judgement.

A second explanation. In conversation with my co-author Kim Seong-june 6d, he emphasised the 'smooth' nature of properly-played games at 5 dan level and above, depending on good reading and positional judgement. The 'breaks' such as invasions, probes in enclosures and so on are factored in, rather than being considered exterior forces. The idea of 'disruptive' play recedes from the importance it has for most amateur levels. Fewer but more appropriate invasions and probes are played, too. Perhaps hamete count as a kind of break, also.

A third comment: Level 4 is also (in my thought) derived from the celebrated chess coach Mark Dvoretskii (Dvoretsky), and his teaching material. The 'analyses' are intended as rather deeper investigations requiring the consideration of multiple lines, to the extent that usually isn't put into print. Think, in go terms now, of the carpenter's square position. Is it problem, pattern, lesson? All of those and none, really. It is traditionally given as a paradigm example of a 5 dan analysis.

There should be a Level 5 here, but it is rather presumptuous to talk about it: material for insei. Writings of Go Seigen, Fujisawa Hideyuki relating to perceptions belong there, pushing at the limits.