This page is for discussion of full-board positions arising from the enclosure opening, subclassified by White's side pattern. 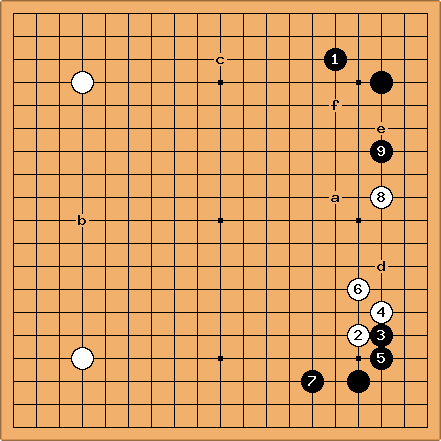 Should White play a to make his group stronger or around b , which is oba?

Alex Weldon: I'd be interested to know the answer(For the record, I'd play b in a game, but I have a feeling that that's wrong... still, I'd hate to play a and give Black sente to play on the left, since he's already ahead in the balance of territory)

Charles My first thought was that a was a bit slow but ... (but I wanted to look at what the pros did). Interesting when I did: 11 examples, five at c, four at a, only two at b. So you guys have a false dichotomy here.

By the way, White's group has a well known weakness at d: but that doesn't make it a weak group in the usual sense.

Alex Weldon: Cool, thanks. I was originally going to say that c (or one line below) would have been my move, but since it wasn't given as an option, I chose b because, as you said, a seems slow, and I like to try to be fleet-footed. I'm not surprised that it's not as clear-cut as Helcio seemed to be suggesting. I don't see anything there that looks like "the only move."

unkx80: To me both a and b are playable.

Bill: 'a' is not oba, by the way. And considering that the 'vote' is 7 to 4 against it, you can't exactly consider it to be kyuuba, either.

BobMcGuigan: a may not be urgent for White but I think it's interesting that

could be considered urgent for Black since a White move at e is big. I think I'd play a if I were playing white in this position. I'm not worried about a splitting move by Black below the starpoint on the left since White isn't going to be able to do much with a large san-ren-sei based moyo due to the strong low black stones at

would not have been as big.

HelcioAlexandre I've been playing this position quite often lately. Most of my opponents play a (4 kyu IGS) and a few play b when I usually get's a good attack against white group later in the game. No one ever played c. My personal opinion is that a and c works well against black formation keeping it under control b ignores board position to setup a san ren sei. Playing at c would avoid a double wing formation by black that would work well with an attack against white slight weak group. Also, I don't think that a is too slow. It builds power and take away good moves that white could make against this group later in the game.

Since we are talking about enclosure opening [1], I 'd like to make questions about 1st Saikyo - League - Go Seigen vs Fujisawa Hosai fuseki (I hope it is okay to post it here): 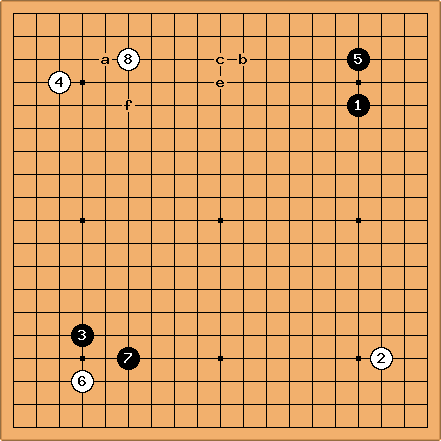 My question is:why does Go Seigen play at

IMHO it's because of black corner enclosure on the upper right. a move at 8 does a better job in restrain black expansion on this side of the board. If white plays at a his next followup will be c. but playing at 8 he can go further at b. For black, i've read in Apreciating Famous Games that playing a e with a followup at f is the modern aproach and that playing at b is the classic way.

Also, I've seen GoSeigen playing 8 more than once against black enclosure. So I though it might be a good reason for playing this way.

Well, no. Not as at enclosure opening. It is Bill who somehow objects to using the term for the commonest pattern. Charles