is a very common 3-4 point joseki. Subsequently, a White move at a or a Black move at b is very large. The reason is that the checking extension of b amplifies the severity of a Black invasion at c. However, it should be noted that even with White a, the invasion at c still exists, but much less severe.

Depending on the left side of the board,

may choose to play at d or e.

here settles the position in one move, while

at d or e emphasizes an additional extension on the left side.

playing the clamp at f is an old joseki.

Compared to the joseki when

makes a solid connection (see 3-4 point high approach, inside contact, solid connection), deep invasion by Black is quite possible - but it has good prospects for future development.

There are other variants to the joseki, see the section on "Variants" below.

Because the invasion can potentially rob White of his base, it is usual for White to jump at

The remainder of this page discusses the invasion when White did not defend his three-point extension.

threatens to connect at a, the standard reply is at

. Many of the sequences after

are well-established enough to be called side joseki.

can be played at b for territory, or c for outside influence.

at d leads to a ko that is heavy for both players, so the timing for this move is important.

A discussion of why

is better than a can be found here.

here is not recommended. After

connects. White has lost his base and his outside is not thick, and Black can aim at cutting the

stone at a. This result is undoubtly favourable for Black.

here goes for territory, so White will get the outside influence. The traditional reply here is

is a tesuji which creates a weakness on White's exterior, so the loss-making exchange of

is necessary for preventing a Black cut at a.

This is one of the side josekis after the invasion.

in the previous diagram can also be played at

here, avoiding the loss-making exchange of a and b. The sequence up to

has also been established as a side joseki.

, followed by a thick move at

here aims at getting influence.

connects and obtains a base, but White' position is generally low.

This sequence is also considered a side joseki.

Black also has the option of attaching at

and starting a ko. This is the only sequence that actually severes the connection of the

stone, and usually is the only sequence available when there is no

stone (or even when there is a White at a). The resulting ko can be heavy for both players, because the winner of this ko usually gets something that looks like a ponnuki.

When Black has just taken back the ko, and both players have no more suitable ko-threats, White may consider a move at b. This usually forces Black c, then White can look forward to taking the ko at d and then ending it with a ponnuki at e. Of course, Black gets to play two moves elsewhere.

It is possible for

to make a peep at the hanging connection if Black wants to emphasize the left side. However, the possibility of invasion at a is now essentially lost.

used to be played at b instead. AI however has a clear preference for

here, as cutting off

is considered good for White's viability.

In recent years, the direct pincer at

is also common. In professional games, one of the most common reply is

, and typically Black will tenuki.

I encountered this move 6 in a game today. It's new to me, does anyone know if white has a standard followup for attacking later? Uberdude: This move was popular around 2015-2016. It aims to get a slightly bigger territory, but leaves some thinness for white to exploit later. That would be too easy if white made the solid instead of hanging connection, but now it's quite balanced. e/g/h are some possible follow ups for white. See pro game pattern search 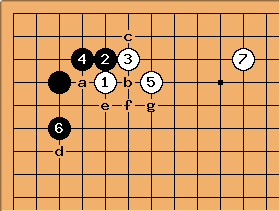