The points lover opening is a detailed fuseki strategy for Black, developed by strong Korean-European amateur In-seong Hwang, for his students in the Yunguseng Dojang. It has generated interest from Western online players, especially kyus.

In late 2021, he explained the opening in a paywalled lecture, which can be viewed by becoming a Yunguseng member. The lowest level of membership is 33 / month. After the release of this lecture, the points lover opening became popular amongst Yunguseng students, with the result that Clossius and the Massachusetts Go Association created their own, freely viewable, videos explaining it and reviewing its use in kyu games.

The points lover opening is a territorial fuseki which emphasises establishing an early cash lead. It's based on the 3-4 point and the keima shimari, in what might be called a "rotated orthodox" formation, as so: Contrary to classical opening etiquette, In-seong advised to begin as in the diagram, with the first stone in the diagonally western half of the board. (

Regardless of order, this three stone setup (see also 1-3-5s and their further variants) has been

It has been played professionally since before 1800, but didn't become popular until the late 1950s, when it appeared in about 4% of games. Its peak percentage was in the early 60s, showing up in around 5% of games. Thereafter it's gone periodically in and out of fashion, oscillating between peaks as high as 3.6% in the mid-80s and troughs as low as 0.6% at the turn of the century.

As a "rotated orthodox" setup, it contrasts with the regular or "facing" 3-4 orthodox, as shown below, which has always been a bit more popular. The points lover opening uses early 3-3 invasions to aim at taking territory (although White can, of course, resist that outcome with the double hane. As many kyu players, especially below 5k, don't regularly consider the double hane, this is however a relatively forcing idea.

It also uses the 3-4 kick. This apparently doesn't yet have a page, apart from the pretty miserable single diagram here, that doesn't even display the usual shape, which is as below:

Due to its inclusion of these two hypermodern techniques, the points lover isn't really a "traditional" opening despite sometimes being styled as such.

Quite predictably, the high approach to the 3-4 is met with the inside attachment, aiming at the "tsukehiki" joseki. White does have the option to instead force an avalanche shape. However, with hypermodern insight Black can decline the "proper" avalanches (large and small) and play peacefully and territorially, using the "avalanche evasion" or "neo-avalanche" (or, as it's titled here, the "avalanche descent"). 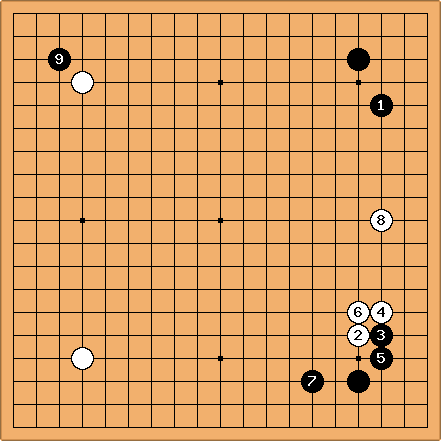 Clossius, an AGA 4d and experienced teacher, has made two videos on the points lover opening:

Michael Sherman, teacher for the Massachussetts Go Association, taught the opening to both the MGA's DDK and SDK class on 8 Jan. 2022, in a

To research similar openings in professional games, Waltheri can be used.

For detailed discussion of the points lover, further to what's been presented in this article, try raising the topic on Discord. Clossius', BenKyo's, the MGA's, and OSR's servers are good places to start. Also try asking about it on Clossius' Twitch stream.

bugcat: It seems to me that the points lover opening has "meta-strategic" traits, in that it addresses factors that are "off the board".

1. By tightly restricting Black's choices, it removes the scope for mistakes by eliminating errors that would have otherwise seemed reasonable to Black.

2. In some ways it seems to exploit typical kyu weaknesses, for instance a lack of attentiveness to the possibility of not allowing the 3-3 invasion to take the corner, and a poor grasp of how to best make territory in the centre and on the sides.