Sente is a Japanese Go term adopted into English.

The root meaning of sente is playing first.

The following are derived meanings:

A player having sente

A player has sente if it is their turn. (In particular, when they do not have to answer their opponent's last move.) Thus, a player who has sente can decide where to play next.

Just as the base meaning of sente is playing first, a derived meaning is playing first in a local position. Thus, a player may avoid a local reply to the opponent's last move and take sente to play first elsewhere.

A move is sente if the opponent has to answer it, so the player who plays it will have sente after the exchange. For example: 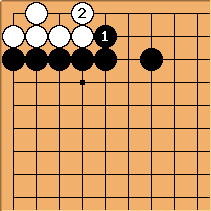 In this position Black can play

in sente, because White has to answer

to avoid dying. Not to have sente is to be constrained into a direct answer to your opponent's previous play. This state of affairs is called gote: having gote, taking or accepting gote.

is worth 15 points locally in deiri counting. If there are larger plays on the board, White will ignore the threat and choose one of the larger plays. Exactly speaking, a sente move can be defined as "a move whose follow-up play is the largest on the board". Therefore, whether a move is sente or not changes many times during the game, depending on what's happening in other areas.)

The English term most closely connected is therefore the initiative: which changes hands during the game. We also, particularly in the endgame, describe a move as being

A position is sente for a player if one may expect them to get to play there first.

This position is sente for Black. [1] After Black a, he has a follow-up play at b, saving two stones (worth 4 points). On the other hand, White's play at a has no follow-up plays. Therefore we expect Black to be able to play first in this position with sente, at some point in the endgame (more exactly, when the largest play on the board is worth less than 4 points). We say that Black has the privilege of playing first in this position.

Patrick Traill: Are these usages perhaps discouraged, deprecated, disparaged or despised? In The Endgame (the book) they certainly apply the terminology to situations, which seems to mean the same as positions. Please someone update the paragraph to reflect observed usage and educated opinion and remove this annotation.

Sente in the endgame

As noted above, in the endgame the classification into (one-sided) sente, reverse sente, double sente or gote (i.e. double gote) is much used. In particular, a local sente position often refers to one player having a sente move and the opponent having a gote move. This classification is important to determine the correct priority of plays.

[1] Robert Pauli: Another way to check that is to take four copies of this position and let Black start. If White always answers, she collects 4*4 = 16 points. If not, only 0 + 4 + 5 + 5 = 14 are hers. To broaden the picture, replace the black pair with respectively ＋ (an empty intersection)