Hi, I'm playing on KGS, DGS, Oro and at club (Rennes - France), around 6k. On KGS I'm as sometimes known as Mifasol (guest) or Kleene (Minue's pupil).
If you have a comment or a question, please feel free use the last part of this page :-) My english being not as good as I'd like, feel free to correct my spelling mistakes too ;-p

As a side note I hope SL will soon provide a way to index more than 10 moves on a diagram, you will prolly understand my point if you scroll down a bit ;-)

Here are the ones (about go) I'm owning and reading:

Books I read at least once but I don't own myself:

My "Best Of" with the level I had when I read them first:

To come before the end of the year: Federal stage, League stage, Nantes, Rennes ...

28th March, here we go! I'm in the car with a few people from the same city I'm from, going to the go wider tournament in Europe. Almost 400 players will meet and have more than 2400 games on three days.

A few hours later we arrive at the tournament's place, and it's already the time to play. I'm quite excited, 6 kyu! This won't be easy at all for me, but prolly very teachful. 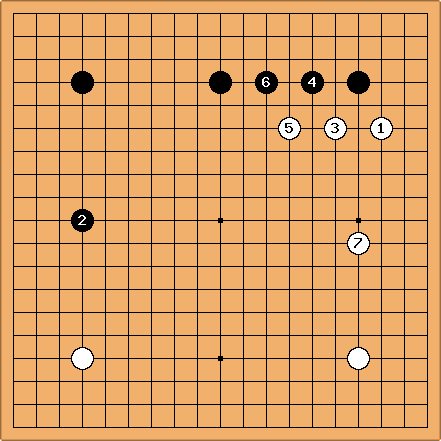 Wait, I start by an even game against a 5 kyu! A cool guy from London who messed up his san-ren-sei oppening. Countered it the way Cho Chikun did once against Takemiya. See Diagram. In the pro game, Cho went for san san in the upper left instead of 7, but Takemiya sort of punished playing a sente counter (keima after the classical block) and black got 7. I won%%%
One big point about this tournament, we had 1h30 by player! 3 hours a game make it hard thinking! But I kept losing my 2nd game of the day, 6 hours for 2 games is too much for me.

My second opponent was 5 kyu too, a danish guy. I had a very expensive fuseki, he was very territorial oriented ... At some point I did a big mistake going greedy and giving him a weak group, an ideal target to attack and ruin my spheres of influence. I lost. 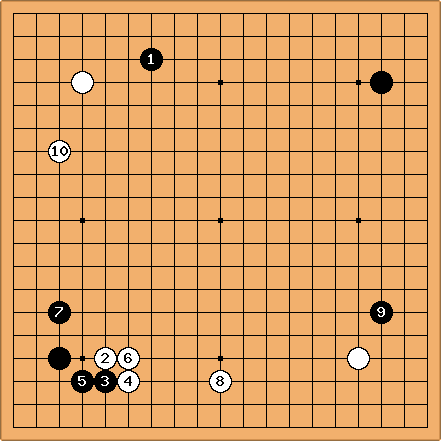 My third game is prolly the one I'm the more satisfied with, I lost and did several mistakes but it was very close and nice against another 5 kyu (HisokaH on KGS) and got reviewed by a chinese pro! See diagrams for the 14 first moves, I'm white. 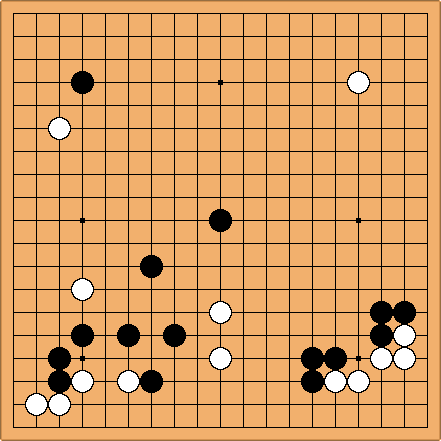 Not to be mentioned I lost in the afternoon too ... But won my 5th game against a 8 kyu (hopefully!). Last game was again a guy from spain, I oppened with tengen. He made some big mistakes in the oppening, see diagram, but when came the first close fight I messed it up so badly that I almost gave up. Bah! At least he was a very nice person and had fun playing with him.

I'd like to thank YingYang?, aka Antoine, a cool guy from the KGS "gote" room thanks to who we had somewhere to sleep ^^

28 players were qualified this year for this regional (West League) contest. The stronger ones were

The parc (Guibel) where we played is a very nice place and François is the owner. It's sort of a hight standing camping with small houses near the sea. If you look for a place for hollydays in France where you can play go, that may be a good choice ;-) More informations about that palce: 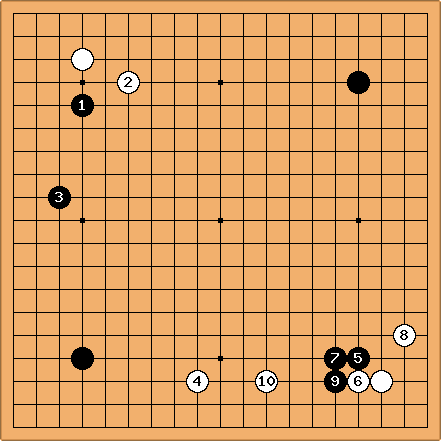 I came as a 6 kyu myself, the average being around 4 or 5k. First game I played even against Lionel FISHER (see diagram for oppening). I'm sure you know who won ;-) 9 was a mistake, hopefully 10 was one too. After that I extended the normal way. Later in the game, I made a big moyo on the left but it wasn't enough to compensate the lost of the meaning of my hoshi in the upper right. At least, I wasn't ridiculous :-) 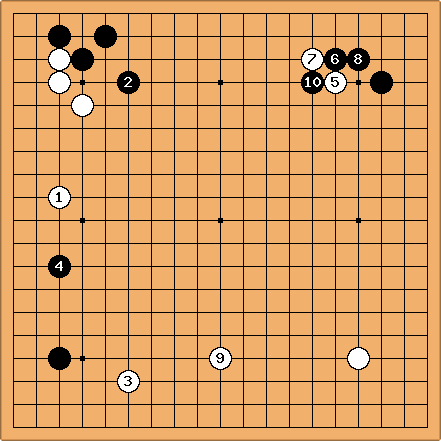 I won against a 11k, a 9k, and lost a 5k. Then it was time for the last game I had to play. My opponent was Bernard LEBERT (2k), see diagram for the start of my "crazy" opening (I'm white). I was ahead at the early end of chuban and lost concentration, sad :-( Anyway it was a very nice game, and I'm pround of it. By the way, I'd like to thank Motoki NOGUSHI (7d) for his useful review on that one!

I ended 16th out of the 28 players, 3rd out of the 6 from my club. 7 got the right to go for the 3rd phase of the championship, the national contest, 2 of them (Benjamin PAPAZOGLOU (4d), Emeric SALMON (1k)) are from my club. So I'm the first of the 4 ones not qualified from my club ;-) I hope for some "real" good results in the incoming tournaments.

No full game diagrams this time, drank too much to remember well enough how I played ;-) Another reason is that I played faster than usual.

My first game was against another 8k (Mathieu), I was ahead by 20 but had a lack of concentration in the yose and made a big enough mistake to deserve a lose. After that I won all my games, 2 giving 2 handicap stones to some 10k players (Paul and Adrien), and 2 against 7k players (Patrick and Léo). 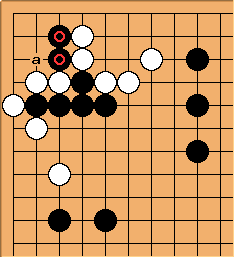 An intersting problem arised against Léo, try to find it without looking at the solution. Never seen it before, even thought I played it in the actual game, but it sounds classical. Black to play, can he make a good use of the marked stones? Playing at "a" would lead to a disaster. 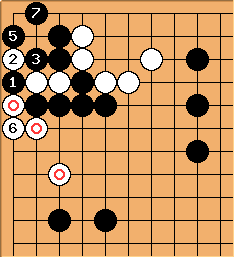 Here is the solution (4 at 1), a nice throw-in tesuji. White can choose to keep the corner (playing 2 at 3) but will sacrifice the outside marked stones, it's prolly better anyway cause Léo failed to save them and gave up.

As I wished, I got some good results (3rd out of 25 players, the 5 to 10k division) and some good prizes. But I'll have to do the same with a more accurate rank. I hope that my official rank will be more around 6 or 7k next time. Can't wait for the 2 weeks federal stage (with 2 tournaments) to come soon!

My second attempt to 2nd round of the national championship! It's at the same place as before, scroll up for more informations.

I won 3 games out of 5, but that's not the point. I'm now almost 3k (not officialy yet tho) and trying fun things. My first game as black I tried tengen against a 2k, lost by 4.5 points. My second game as black, I tried 2 7-7 against a 9k and won by resign. 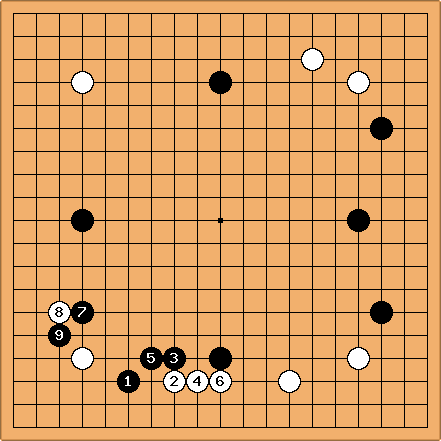 And finally against a 3k I take the 4 borders while my opponent takes 4 hoshis. I gonna show the oppening. I'm pretty ahead after

, but I did a BIG mistake close to the endgame that cost me the game. Fun fun fun!