The 4-4 Point 3-3 Invasion, hane-extend is a feature of the traditional 3-3 invasion joseki. Black creates a wall in gote, but White obtains corner territory. This sequence of moves is not played as much by professionals after the AI Revolution because Black's wall has certain weaknesses compared to a similar wall created after the three stone hane shape.

Moves are ranked by frequency in all historical professional games[1], which is sensitive to whole-board position, and reordered to reflect joseki that are currently popular in contemporary games. 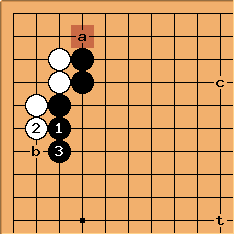 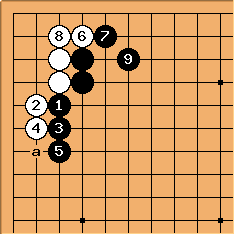 The traditional joseki continues with

hane and connect. This guarantees life in a sizable corner, but Black is extremely thick and the tiger's mouth projects a large amount of influence. Historically, it was believed that Black is better in this type of situation, as the value of Black's influence is greater than the tangible value of White's territory in the corner.

This belief is still true in the AI era, but only if White plays the

hane. Many professionals describe the hane as a mistake that makes Black too thick. If White omits the hane, the 3-3 invasion is an even result because Black's wall is still attackable.

It is important to note that these recommendations are relevant in the context of an empty board in the early opening. Depending on the board position and situational context, the hane and connect can still be a good territorial move. In fact, some professionals choose to tenuki after

because they plan to await more information before deciding to attack or take territory. 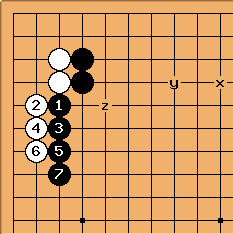 Ever since the AI revolution, professionals and strong AI programs recommend crawling once with

to guarantee life and then tenuki. The purpose of playing this way is to preserve the possibility of attacking Black's wall in the future. Black's wall is influential but not yet thick: it is lacking eyeshape. In fact, it is very common for amateur players to immediately pincer around x and/or y, which later threatens to take a peep at z.

Some players would say that Black's wall isn't thickness, but rather a target. The moves at y and z have a convenient geometric relationship (large knight) that is efficient play for White. Regardless of the outcome, it is easy for White to develop a stable position on the upper side of the board, which makes it difficult for Black to make good use of their wall. In many circumstances, Black can end up over-concentrated.

on the second line is essential for any kind of pincer strategy. Without

, almost any move that Black takes against the corner is sente, which would negate an attempted pincer attack. Although crawling on the second line is traditionally called "the line of defeat", it is a necessary move that paints a target on Black's wall.

If White is unsure whether they will attack Black's wall, it is possible to tenuki in order to make a decision later. Crawling on the line of defeat with

can temporarily give Black a subtle amount of extra thickness (which could affect spacing/ladders), so sometimes professionals will defer the push until the most suitable moment.

Provisionally, White is betting that Black will not turn with

is sente against the corner and forces White to exchange the hane-connect, tewari analysis would reveal that Black's

move is slow in the early opening. If White played the traditional 3-3 invasion, Black would not invest an extra move to turn in gote.

That said, almost any move that Black makes is sente against the corner. If Black descends with

(Diagram 2), White must push on the second line with

. Continuing with a is territorial but gote, whereas b fights for sente. Blocking with

is a mistake (Diagram 3), as this creates a J group that is on the brink of life and death.

What if black plays the hane on the second line? 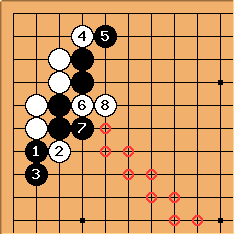 A common beginner mistake is to hane with

instead of extending. This results in a collapse of Black's position due to multiple cutting points.

This position is sensitive to ladders, but White can obtain a good result regardless if the ladder works or not.

For replies to this mistake see 3-3 Point Invasion and RTGProblem31.

When should white exchange the hane and tiger's mouth? 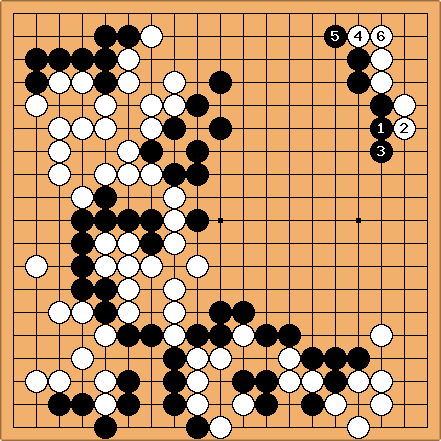 The hane and connect can still be an AI/professional recommended move in certain circumstances.

When the 3-3 invasion is played in the middle game or later (which is rare in modern go), sometimes Black may have added thickness on the outside that impacts our assessment of the corner. In Shi Jingyao? vs. Yang Bowei (2020), Black has a double ponnuki that makes them extremely strong in the center of the board. It is unlikely that any pincer strategy will prove fruitful for White, as this would be like jumping into a den of tigers. As the proverb goes, White should play away from thickness.

White has no plan to pincer Black's wall, so the hane and connect is a territorial move that maximizes the size of White's corner. Moreover, White is not concerned about making Black even thicker in an area where Black is already strong. While it does seem like Black will obtain a large moyo, White has already calculated they have enough points to win the game. The

hane is a calm move that White plays to say that they are winning, and there isn't a need to risk a fight.

In short, the hane can be a reasonable move when Black is already thick or overconcentrated.

Should white push or tenuki?