The 4-4 point 3-3 invasion, territorial double hane joseki is the settled position of a popular 3-3 invasion joseki.

This variation has proved very popular with AIs such as LeelaZero and Minigo during a certain phase of their training; the AI community took to calling it the flower joseki, alluding to the resulting ponnuki, as noted in 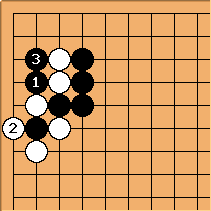 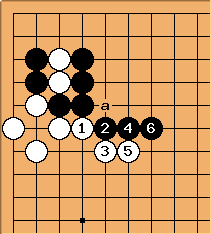 may become a big point, igniting a pushing battle by threatening the hane at a. For this reason,

would be slack. Typically Black responds at

if he chooses not to ignore

is a common sequence. Note that if Black plays

, then Black loses the corner: see the next diagram. 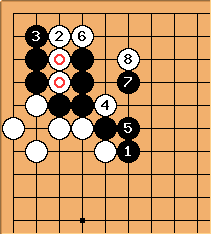 Black would probably like to play the double hane of

in this diagram, but here the aji of the marked white stones come into play. White can retake the corner -- or worse. 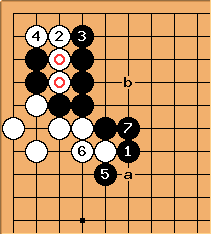 This side stepping by Black does not really produce a good result, leaving weaknesses at a and b in gote. This is especially as Black usually chooses this joseki (two step hane after the 3-3 invasion) when a wall facing the top side is not very valuable, opting instead to take points in the corner. 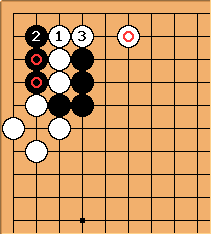 If White gets the marked stone in place,

will either link up as in the diagram or capture the marked black stones. 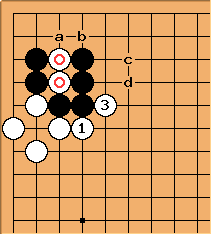 The other aji is that

threaten to extract the marked stones in the same way as above, so that

becomes almost absolute sente. This in itself is not so bad, but it could be a minus if Black's reason for not following the standard sequence was that the top side is not interesting. According to GoBase, Black's responses to

include a, b and c. If Black has a suitable extension on the right side, Black can also respond at d. 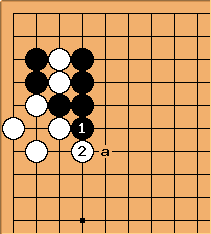 If White chooses to tenuki, Black may choose to exchange

. Subsequently, Black may hane at a, but in professional games Black is also seen to tenuki after the exchange (simply to prevent White from getting 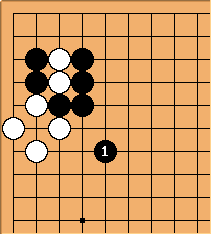 If Black wants to build up the upper side, he can play 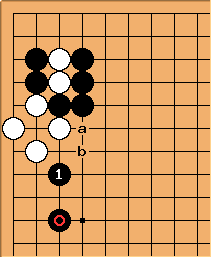 If Black has support on the left side, say

, then Black may elect to attack at

is seen replying at either a or b.

Note that without the support of stones such as

, a Black move at

is very likely to end up being a misplaced stone.

The Presence of Other Stones 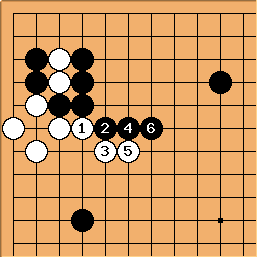 After the variation "taking the corner" White will most likely continue with these moves. In most cases, when White invades at the 3-3 point, Black has stones on both sides, at or around the places shown here. Black's left side stone has lost much of its value after this sequence.