A sente-sente (or double-sente) move is a move which is sente for either player. It is always important to grab these moves as soon as possible, because whoever plays them gets points for free - no move is lost by playing a double sente play, but it does give one points.

Note: However ... Double Sente is Relative.

The simplest sente-sente position is on the left. White can play

in sente. Compared to a black play (Black 1 at 3 etc.), White has two more points of territory, whereas Black has two fewer, i.e. a total of four points. This is said to be a four-point sente play for both sides. (The actual value of a double sente is a relatively large number.)

The "value" of four points is deceptive. Double sente plays should normally be played as soon as they arise on the board. The question is how large the threats for each player are, compared with other plays on the board.

For example, in this case, if Black does not answer with

, White can take a large chunk out of Black's territory. 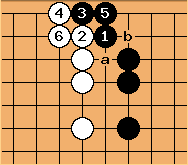 In this diagram (assuming that there is white territory to the left and black to the right),

is often a double sente move. If White does not answer, Black makes a huge incursion into White's territory. White can play the same move at 1, threatening to jump into Black's. White answers at

, and Black can also play

in sente. White can exchange a for b later.

It is important to play this type of move before the opponent does so: Black has gained six points here compared to a white play at 1, at no cost of moves. Giving two of these, rather common, positions to your opponent already costs over 10 points - which can easily be the difference between win and loss even at moderate levels.