The 4-4 point 3-3 invasion simple extension is a common and popular modern joseki ever since the AI revolution. It is a basic move that is played at all skill levels, is well-regarded by strong AI programs, and emphasizes taking sente. While it may not be the strongest local response, forming a three-stone wall is good shape and resilient, so it can be a good choice if Black intends to tenuki.

White's main options are to (A) jump ahead or (B) push. Tenuki is not advised. 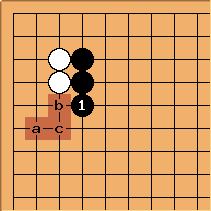 Pay attention to the ladder for the one-space jump 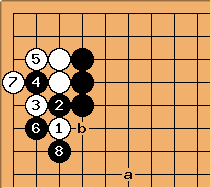 If the ladder favors Black, Black can ladder the

stone as depicted above.

Black's group becomes very strong and White has been sealed in on both sides.

If White attempts to play a ladder breaker, Black will often play somewhere around a or simply capture at b.

Jumping ahead vs. Push? 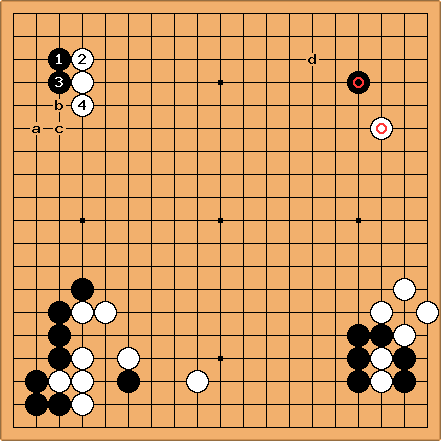 To illustrate the considerations when deciding between jumping ahead or to push, Oh Yujin (6p) vs. Wang Chenxing (5p) (2019) teaches us some useful principles. In the depicted game, white approached the top right corner with

, but black chose to tenuki and instead invaded the top left corner with

We can clearly see that black owes a move at d, so sente is especially valuable in this board position. White played a sente corner variation with

, and now it is black's turn to move.

at d is not possible. Black should not tenuki from the top left corner.

at c is a valid option because black possesses the ladder. However, is it a good idea?

If black jumps ahead with a or c, it is obvious that white will play

at d to double approach the top right corner, which is an unpleasant outcome. White has already profited, but black has very little to gain. The jump ahead shape is very stable for both players, and there are no other big moves left on the board.

Instead, Oh Yujin (Black) opts to push at b. This move fights for sente in the sense that it dares white to create the unstable three-stone hane shape. White cannot play in both the top left and top right corners at the same time, so they must choose between the valuable local continuation on the top left or tenuki to double approach the top right.

Whichever one that white chooses, black can take the other.

Tenuki is not advised 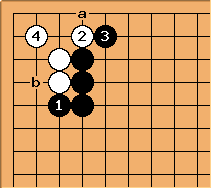 White tenuki is almost always a mistake. The corner becomes a ko for life.

at a to initiate a ko. However, black will lose sente by offering the ko. It is white's privilege to start the ko whenever they like, so sometimes skilled players may choose to defer the atari when there are more valuable moves on the board.

at b permits white to live, but white will live in gote.