BobMcGuigan: How do double sente moves factor into the sente gains nothing discussion? It seems that they are not "owned" by either player. Or are they like checks that could be cashed by either player and have a fairly early expiration date?

Charles Matthews Using miai counting you get the result 'divide by zero' for double sente, 'divide by one' for one-sided sente. This is a qualitative difference, to put it mildly. Getting a double sente is really a trade-off against nothing: pure gain.

Bill: Sente has more than one meaning. Double sente, as I have pointed out, is relative to the rest of the board. If the double sente is a huge gote such that each player has a reply bigger than anything else on the board, then the player with the move should normally play it now. Playing a gote with sente makes a profit. If the double sente is a sente, such that the reverse sente has a reply bigger than the rest of the board, playing that reverse sente will show a profit. :-)

Charles I think this important type of example isn't yet anywhere on SL.

I suspect that in actual games the question of who will get a double sente play will often be decided by considerations of aji keshi: one player is simply reluctant to play out the position too early. 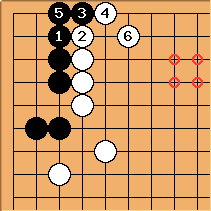 For example in this case

can initiate an endgame sequence that is his sente (large enough to play early in the macroendgame if not earlier, I guess, in typical games, since if White omits

Black can take away many points). However Black in so doing gives up all serious chance of fighting near the circled points. 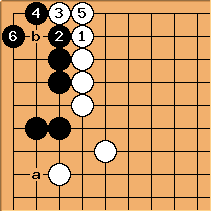 may or may not turn out to be sente for White. If

is played, no problem. Black may resist: we might see

played at a to complicate the position, or we might see

as tenuki and then

for a ko [1](Black having local ko threats). Or indeed if Black plays played tenuki White might just play at a assuming Black would react to save the corner from ko.

It's a bit hard to understand all the ramifications here, but my guess is that Black can hope to play the (1) line, with good timing, holding back only for aji keshi reasons in the middle game. Once it is clear that any invasion would be mochikomi - the virtual group inside White's territory is dead - then quite likely Black's hanetsugi on the second line (

in the (1) diagram) is gote though very big. Depending on the distribution of the other big endgame points, I take (1) to be a normal way to play here. (Would be good to check in some pro games ...)

[1] This type of ko is discussed at corner 1-2 connection value.