Sente or gote is often a large difference: If you do the same thing in gote that could also be done in sente, that is a big difference - you lose a whole move. Players obviously will prefer sente sequences, other things being equal. 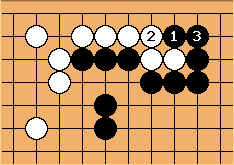 An example where this error has been made is in this diagram. Black plays atari with

, and Black connects at

. Black has defended the right hand side here, but would have done better by playing at

immediately. This also threatens to capture the two white stones (by playing 2), but if White now answers, Black has sente and can play elsewhere.

Also note that sente is relative: If Black play at

here early in the game, White will not answer at

, but play elsewhere, because the threat of capturing the two stones is not large enough. Of course, also in this case

is still the correct move.

Comment: If the area to the right is Black's,

is unlikely to be sente. It would be larger than the threat to take White's stones. -- Bill Spight

Alex Weldon: I think there's some confusion here because of the expression "to lose sente" (lose as a verb) and the noun "a losing sente" (losing as an adjective). No doubt the creator of this page wasn't aware of the second expression and believed he was creating example of "a play that loses sente (when it could have been kept)." Of course, it's still not a good example of that because, as you point out, at high enough levels of play, even the sagari will be gote, since the two-stone capture is relatively small. However, if we switch the example around a bit, we DO get a losing sente example: 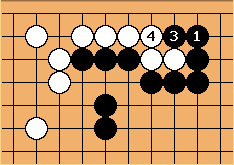 here, and White correctly tenukis, then Black's best local follow-up (not immediately, of course, but in the endgame) would be

is the losing sente, since it gains very little and removes the option of a larger follow-up later.

Of course, almost no one would play like this - anyone who knows enough to play

to start with would not play

later - but it makes an effective tewari to show why

in the first diagram is wrong.

tderz: Perhaps this is then an example for preventing sente no gote?
I might have gotten confused with the terminology here :-)

Could please s.o. point out the (a) correct terminology to me? 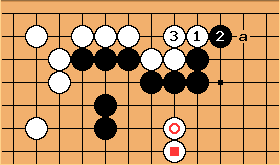 tderz: What could happen after White's gote

?
The white attachment a is threatening. 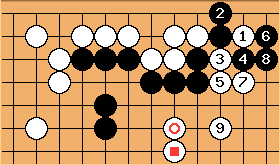 If there are white stones around

Bill: I think that we do need a page for losing sente plays, which are not necessarily errors. Let's also have a page for taking gote in error.

Alan, thanks for your example. And TDerz, your construction is nice.

may be sente there.