The 4-4 Point 3-3 Invasion, Three-Stone Hane, Switch Sides, Small Knight, Loose Net is the most common continuation of the three-stone hane shape. Black typically plays the loose net when they are unable to ladder the

stone, and this somewhat completes the joseki. The result is considered even for both players.

If White chooses to tenuki, Black has sente moves against the corner that can result in complicated variations that are sensitive to multiple ladders. Professionals often choose to add another move a majority of the time[1]. Even if White does not play the second small knight immediately, White would like to play it as soon as the

ladder becomes favorable for Black, since Black's continuation is more powerful when the ladder is working. Some sources present the added small knight's extension as a part of the joseki. Amateurs who are unfamiliar with the position can be advised to add the second small knight to avoid all complications.

It is important to note that both the

marked stones are not fully captured. The status of these stones is provisionally uncertain. When the ladder favors White (which is usually the case when this joseki is played), White can capture the three

stones in gote with the hane at z. However, White usually does not want to do this unnecessarily because taking three stones in gote is small, and Black will become especially thick towards the left. In some joseki variations, Black is willing to discard the three

stones. White also has the option to run out the

cutting stone, but this is often not a good idea until White is comfortably alive on the top.

Even after the joseki is completed, this position is sensitive to ladders because Black can attack White's position when the ladder favors Black. Without the ladder, the attack is blunted since White always has the option to simply capture the three

stones and make definitive life. For this reason, if Black aims to fight or attack White, Black will often play moves in the fuseki to gain the ladder. It is also possible for Black to play a move from the top side even when they lack the ladder, but in those situations, the pincer stone functions as a splitting move rather than a serious attack.

Moves are listed by frequency in recent professional games[1], which is sensitive to whole-board position. Bolded moves are commonly considered joseki. 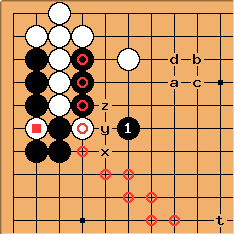 White can safely tenuki as long as the ladder is not working for Black (which is usually the case when the joseki is first played).

However, when the ladder works for Black again, returning to play a local move becomes very big. This is because Black's attack is much more severe when they have the ladder. In professional games, it is not unusual for Black to play a move that threatens the ladder, and White will return to play the small knight extension. If Black can get a very good ladder breaker, White may want to consider playing the immediate local extension so that Black cannot get a ladder breaker.

In summary, White does not want Black to play the local follow-up when the ladder works for Black and professionals take measures to ensure that it rarely happens.

Capturing the three stones is slow

When Black lacks the ladder (Diagram 2), White can capture the three

stones in gote with the

hane at a (Diagram 1). Black plays the net with

, and Black is able to squeeze from the outside (Diagram 3). This result is typically considered good for Black, as Black becomes thick towards the left side. Capturing three stones in gote is slow early on in the game, and White typically does not want to play the

hane unless forced to.

It is important to recognize that capturing with the hane at a eliminates the aji that White could later pursue with b or c (Diagram 1). Sometimes, White might prefer the bump at b, which could also allow White to capture the three stones depending on Black's response, or alternatively initiate a fight. 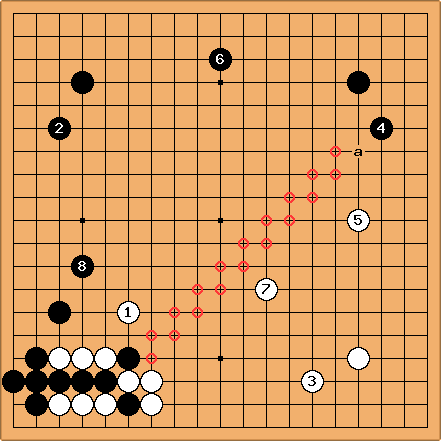 yuzukitea: Generally speaking, Black can comfortably tenuki so long as the ladder does not work for White. If and when the ladder favors White, the small knight's move becomes more valuable (big), and both players would like to occupy it.

This principle is illustrated in Li Qincheng vs. Fan Yunruo. After White played the loose net with

, Black chose to tenuki on

, which is perfectly reasonable. Both players chose to play several other moves in the opening, before finally White threatened the ladder with

, which is the move recommended by AI.

As a side note,

shoulder hit at a is also AI's top recommendation. The shoulder hit would directly threaten the ladder, and in this board position AI thinks Black should tenuki and play the small knight with

. The hypothetical shoulder hit with

therefore serves as a ladder breaker, and White can press the corner enclosure on

Breaking the ladder in the fuseki 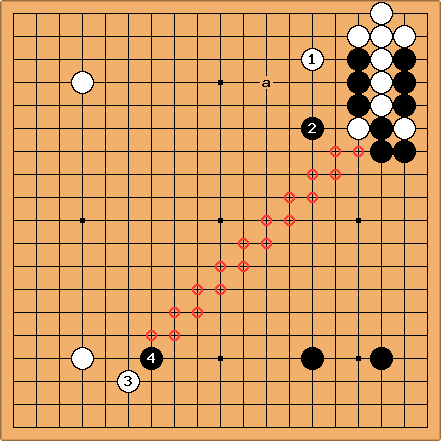 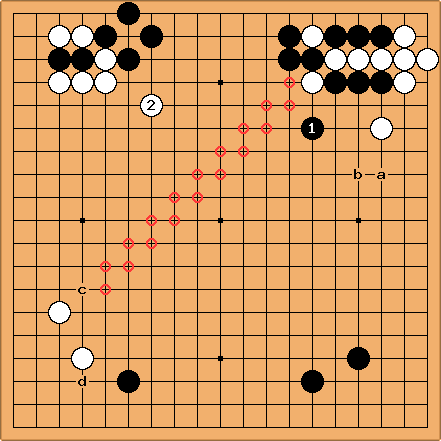 Criticism of the two-space low extension 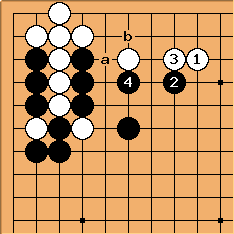 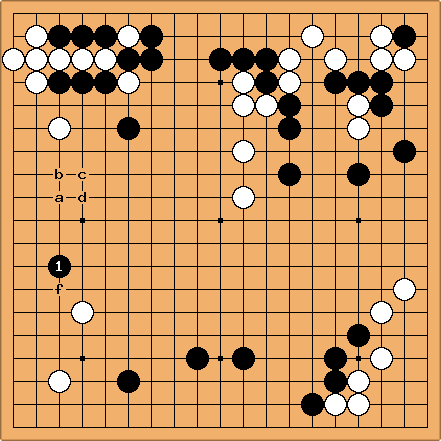 Moving out the cutting stone is not recommended 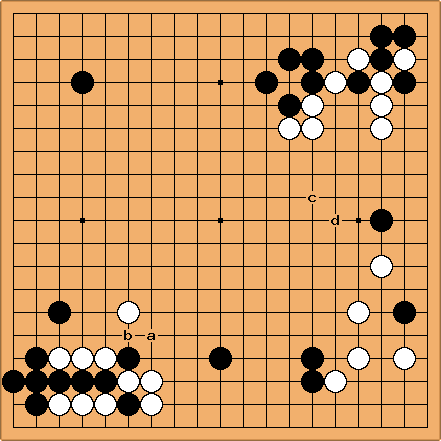