Defending is a way to accept gote. If you pursue a mutual damage plan, not answering the opponent's destructive plays directly, the possession of sente is actually in the balance for a while. You only find out who has it when the dust settles.

A mutual damage contest can be set off by miai: one player doesn't accept the idea that the other will get both of a pair of closely equivalent plays that are ordinarily sente. It can end in a game of 'chicken' (less colloquially, who blinks first).

Mutual damage in the opening is unusual.

An endgame which mutual damage is needed 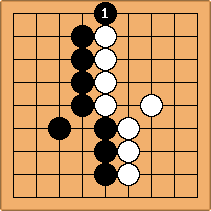 is a typical endgame hane, which threatens heavy damage to White's territory if unanswered.

BillSpight: It is also what is normally called a double sente. It is worth around 9 points (miai), I believe, a huge play. 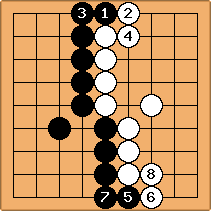 Locally, the sequence comes to a pause after

and Black has sente. He then uses his sente to execute another endgame hane.

Experienced players will agree the game is finished after White

, and it is easy to see that Black wins by 3 points. It feels not entirely fair that Black has been able to play both hanes. Indeed, White has failed to apply the principle of mutual damage. 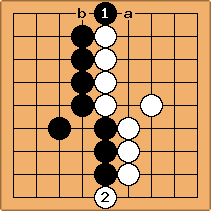 Mutual damage is in fact an application of the miai concept to the endgame. The moment Black plays

to damage White's territory, White must play the equivalent play at

, if only out of self respect.

are worth about the same. However, as Dieter says, White cannot afford to let Black get both hanes. It looks like White should play White a - Black b before

. If Black has to play both points later, White a is aji keshi, but both sides will be invading, and this may be White's chance to inject some aji into Black's position. A difficult question. 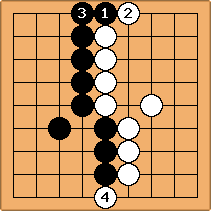 Willemien just giving Bills idea (as written above) a diagram how will this end?

If B defends - loss 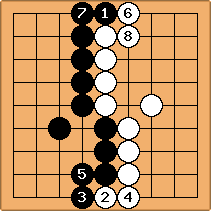 . The game ends after

If B damages W too 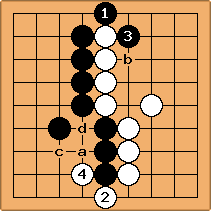 One reason many players fail to apply mutual damage, is that the situation can become very confused if either player refuses to give in as in this diagram.

Another reason is that the situation rarely is as symmetric as in this simple example. Even here it isn't quite symmetric: White a is atari whereas Black b is not.

BillSpight: And White c threatens a snapback at d.

aLegendWai: A difficult question. But who will win finally?

celebrir: I guess White is winning

Andy: Because of this extra snapback aji in the black position on the bottom, I wonder if

would be more correctly played at 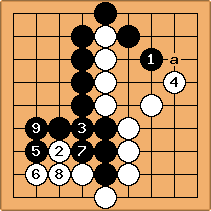 A interesting thing is, that defending with

at a results in a bigger lose for Black. At least in my variations. 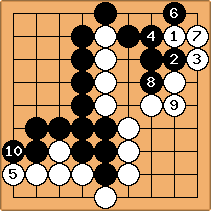 Now White leads with two points on the board + komi. So there is at least enough chaos to take the advantage.

Still, if one player passively answers all "sente" endgame moves by the other, he or she follows a sure path to defeat. 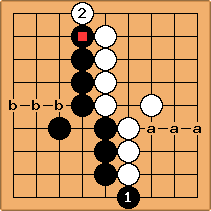 Is this a better line for black? The

forky: worse or equivalent. black's space for damage up to a is smaller than white's down to b