The 4-4 Point 3-3 Invasion, Extend, Push is a possible continuation of a 3-3 invasion joseki. The push is typically played when the invader hopes to contest defender's prioritization of sente, and it often results in the unstable three-stone hane shape. The first player to resume in the corner will take profit.

The defender's main responses are to (A) hane to create the three-stone hane shape, or (B) attempt to build a wall in sente. 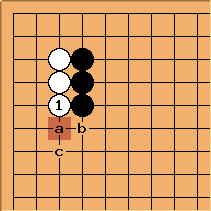 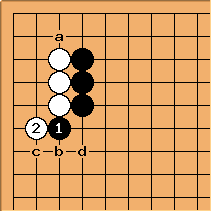 If black plays the hane with

, this reverts to the common 3-stone hane shape. This is the most common choice (~69% frequency)[1].

In the early opening, black can tenuki after this point to preserve sente. However, the local continuations are very valuable, and black hopes to get the first move later. The first player to return will profit, so this shape is somewhat unstable compared to the simple 3-3 joseki.

If black is willing to accept gote, the mainline continuation is the hane at a, which threatens to take away white's corner. Although black's stones are facing the top side, this joseki often switches the direction of play so that black is facing the left side. This is counter-intuitive, so players should train themselves to recognize that this pattern can project influence to the left side.

Alternatively, black can build a wall in gote by extending at b. However, white's corner is quite large, so from a teritorial perspective it's inferior to the hane at a. 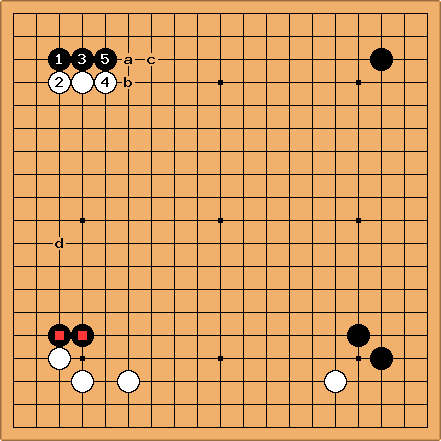