The 3-4 Point Low Approach is a common approach of the 3-4 point. Joseki surrounding this position have been researched for over 400 years in Japan. Historically, it has been regarded as the most effective approach move, and Ishida Yoshio calls it a "treasure-house of joseki" due to its large number of variations[2]. The key ideas of the low approach are:

Black's main responses to the low approach can be classified into: (A) strengthen the side, (B) tenuki, (C) kick, or (D) pincer. 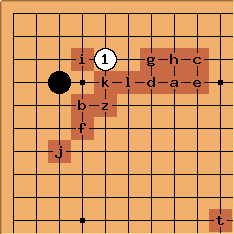 This section aims to describe common themes seen in 3-4 point low approach pincer joseki. Historically, pincering the low approach was extremely common. While pincers have declined in popularity since the AI revolution, they can result in very complex positions that focus on fighting. There are countless variations, but we aim to highlight common patterns and simplifications of various pincer joseki. 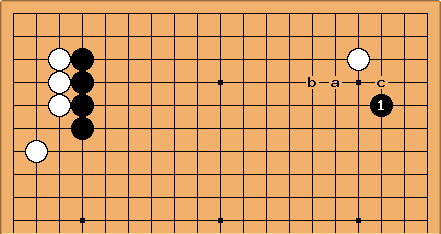 Consider this board position. Where would you play as White?

There is no strict right or wrong answer and the AI believes either a, b, or c is playable.

Is it bad to kick?

Is it bad to pincer?