If a play is sente, under normal circumstances the player whose sente it is will be able to make the play with sente before the opponent can afford to make the reverse sente. We say that the sente player has the privilege of making the play. Privilege is one characteristic of sente. 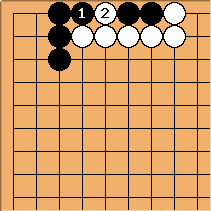 before White would play the gote move at

This is an ambiguous position. Black has the privilege of playing

with sente, but may also play at 2 with gote.

The assertion of privilege is that the play can, at present, be ruled out of order of play considerations. Evidently this state of affairs is something that may persist for a while; but not for ever. It is usually (not always) skilful to postpone certain types of sente play, until the 'last moment' - when the privilege is about to lapse. Other things being equal (which they are often not, in any simple-minded sense) it is a good idea to keep options open, flexibility, avoid aji keshi, retain ko threats and so on. On the other hand, if there is a clear way to win by playing out one's sente endgame, this is typically the right approach.

Question (xela): I've heard the word privilege used as though it's a stronger concept than sente--in other words, there might be (abnormal?) circumstances in which a move is, say, black's sente but not black's privilege. Is this correct? Can anyone give a clear example of how this might happen?

Black's privilege is stronger than black's sente because he can leave the situation for awhile and play the move later in the game. This makes it more of a commentary on the move being of too little value for white to resolve the situation before black does. So any move where the temperature is lowering enough that white may resolve the situation becomes merely sente instead of black's privelege. The quickest example is a double-sente move. If black plays, it will be sente, but if he doesn't, he may lose his chance. -Sojobo

Bill: The concept of privilege tells us that, if there is a sente on the board but there are also larger plays, we expect that the sente will be played with sente, and the reverse sente will not be played. There are exceptions, of course. Privilege just tells us what to expect under normal circumstances.

If the reverse sente is the largest play on the board, the concept of privilege does not apply.

BuggyMind: So "Black's privilege" is a euphemism for "White has better things to do than play reverse sente", right?

Patrick Traill: There is a new page kenri saying: The right to perform a certain action (権利）; if privilege is the conventional translation of kenri in go literature, that (or this) page should be made an alias and the Japanese term (including kanji) added to the text currently here.