The 4-4 Point 3-3 Invasion, Extend, Slide (also known as the "Simple 3-3 Invasion Slide Joseki") is a basic and popular 3-3 invasion joseki. It is one of the simplest joseki, well-regarded by strong AI, and frequently used at all levels of amateur and professional play. In 2019 and 2021, it was the most popular joseki in professional games [2][3]. The position is stable and neither player has urgent follow-ups. 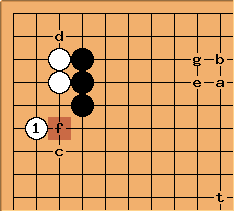 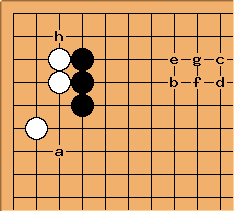 The most common choice by Black is to tenuki (~57%)[1]. This is consistent with the purpose of choosing this joseki, which is to take sente elsewhere on the board while creating a stable group.

Black's three stones are difficult to attack, so Black does not need to add more stones for the time being.

Black's three-stone-wall is resilient and does not need a conservative extension in order to be comfortable. In case Black is pincered, Black can play at x or y to gain strength for their wall. 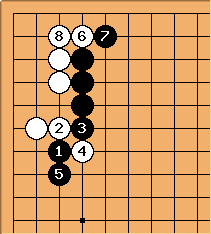 The small knight press is often black's strongest local move in terms of development, making it more preferable than the diagonal attachment on an empty board. However, it is not especially popular among professionals, as this move can be gote, and White does not need to respond. Furthermore, Black can only play this way if they are not afraid of the potential cut.

For example, if Black tries to push White down with

before living in the corner.

It should be noted that black's three-stone wall is not very well suited for further development. The simple 3-3 invasion slide joseki is a defensive formation, and Black often plays this way with the intent to tenuki. If Black hopes to develop the left side or obtain a wall, the three-stone hane shape is more effective for this purpose. The small knight press could be less popular among human professionals because it is simply better to choose a joseki that is more consistent with the player's future plans. However, the small knight press is often considered a good move by strong AI programs.

White's strongest local continuation is the diagonal at

. It is a steady, calm yet big move that threatens a follow-up pincer around a, but generally speaking it is gote. This move helps White develop strength and potential towards the left side of the board. White may be able to attack Black's wall later.

In response to the diagonal, Black can attach at y or hane at z, but the effectiveness of these moves are much weaker compared to before.

The most common continuation is depicted in Diagram 2. Note that White cannot atari at g, since Black's connection will allow Black to hane at i to take most of the corner territory. 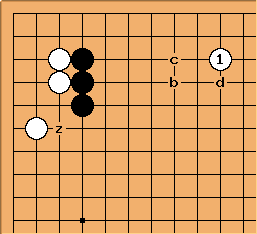 It is also possible for White to pincer without playing the diagonal. However, the pincer is less effective since Black can attach at z to gain strength in sente.

Nonetheless, the three-space pincer around b is considered the vital point of Black's three-stone wall.

is more of a splitting move, where White hopes to make a base on the upper side of the board.

The high pincers at b or d are often played to disrupt a potential Black framework.

The low three-space pincer at c is often played when White has a position on the upper right side and serves as an aggressive extension.

When playing wall extensions, the best moves achieve two things with one stone

yuzukitea: The modern AI-style of play seems to be to omit an extension from three-stone wall unless it is achieving two things with one stone. If you can think of two reasons to play an extension, then it can be a good move. For instance, if the move...

If any two (2) of the above are true, then it can be reasonable to play an extension from the three-stone wall.

When is it best for Black to play the diagonal attachment? 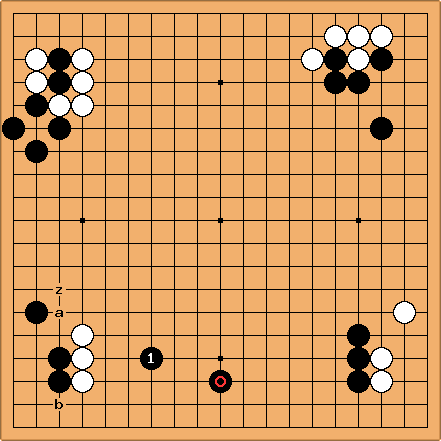 The classic situation to play the diagonal attachment is when the three-stone wall comes under pressure. It is used as kikashi to build thickness or escape towards the center.

In Mi Yuting vs. Yang Dingxin (2019), Black followed up from an earlier extension and played the two-space high pincer with

. Notably, Black has not yet played the diagonal at z, which would make the attack even more severe.

How should White respond? Why?

The attach at a is a probe that may give White more options depending on Black's response. In some situations, White may even be able to obtain to the hane at b for free. Regardless of Black's response, White should move towards the center in order to avoid being sealed in.

Some players may be tempted to make the scorpion shape with the hane at b. However, in this board position, we can see that the

marked stone would an obstacle if White attempted to undercut the bottom side. While there still may be enough space for White to make life in gote (or ko), White does not want to live in gote except as a last resort. For this reason, White should move out since the front door is still open.

If the situation becomes difficult, White can also take the hane at b later. In fact, it is more common to see the scorpion shape when Black already has a move at the diagonal at z.

When is it best for Black to switch sides? 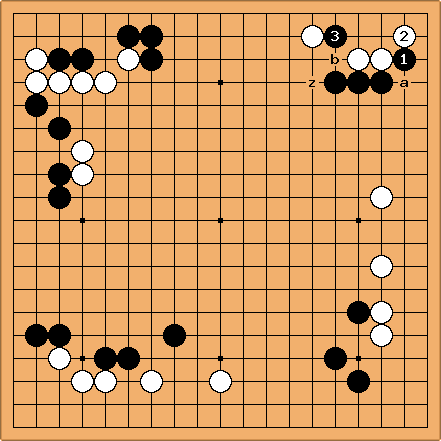 On an empty board, many professional players feel that the joseki to switch sides is better for the invader. However, in certain board positions, it can be an especially good move.

An example is illustrated in Yang Dingxin vs. Ke Jie (2019), where we can se that Black played the hane with

cut, aiming to switch sides. If the normal joseki is played out with

In the game, White (Ke Jie) is unwilling to accept this outcome. Instead of playing peacefully at a, White attempts to resist by reverting to a three-stone hane joseki at b with

, followed by the violent cut at z on

. By doing so, White starts a fight instead of allowing Black to switch sides comfortably.

When is it best for Black to press down? 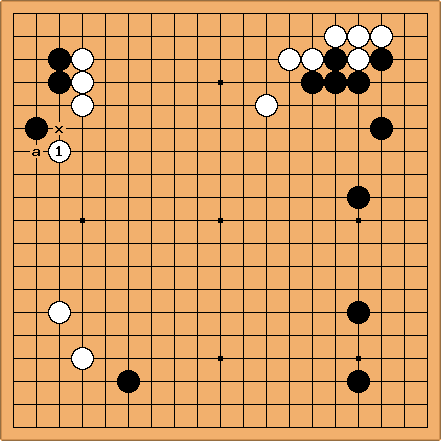 The small knight press is an especially effective move when White has potential on two sides of the board. Although the move is gote, it is an effective way for White to develop an advantageous whole-board position.

This principle is illustrated in Fan Yunruo vs. Dang Yifei (2019), where we can see that White is developing a menacing moyo on the top side. The press at

expands the moyo, and it activates White's potential to develop the right side.

Black chose to tenuki in response to

We can compare the merits of the knight's move

to the diagonal attachment at x. Although attaching at x will allow White to retain sente, this form of contact play is crude and helps Black retain access to the left side. White may think that they will be able to convert the moyo on the upper side of the board into territory, but White cannot secure the entire moyo in one move, and White has essentially put all their eggs in one basket.

While it may seem counter-intuitive, strong players use influence to attack, not make territory. White hopes that Black will invade the moyo (and in fact invites it). White's plan is to profit elsewhere while attacking a weak group, and the small knight's move at

is a subtle move that activates White's future potential in multiple directions.

When does it make sense to make the scorpion shape? 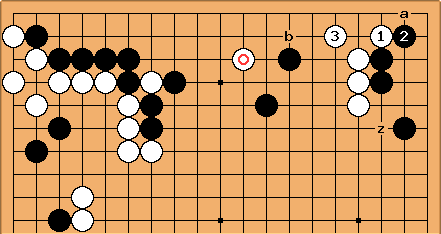 In most circumstances, it is better for White to escape by attaching at z instead of attempting to live small inside. The hane and hanging connection with

is a strategy that White can employ as a last resort when it seems like there is no way good way out.

However, there are exceptions to this general principle, and Han Taehee vs. Park Minkyu (2018) illustrates an example where the hanging connection with

is an especially good move.

In this board position,

threatens to link up with

marked stone. Alternatively, if Black prevents the connection and White is able to play at a, White's group is nearly alive, which leaves Black will a difficult decision. These two moves are miai, which illustrates the ideal circumstance to utilize the scorpion shape  when White has an opening to undercut a Black stone on the second line. 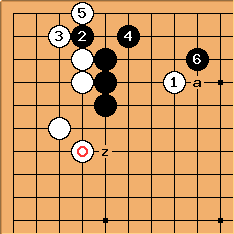 Strong AI programs typically regard the 3-space pincer or 3-space extension at a as the vital point of the three-stone wall. What happens if White plays one stone closer to the wall?

In the accompanying diagram, we see that White has already obtained the valuable diagonal with the marked

stone, which sets up an aggressive attack. Instead of playing the ordinary 3-space pincer, White overplays and pincers at

. Black has several options they can consider.

First, Black can attach at z to develop more strength and then counter-pincer.

Alternatively, Black can make the scorpion shape and undercut White's stone with

, and Black will have no difficulty handling their group.