The 4-4 point 3-3 invasion, double hane initiates a popular contemporary joseki played after the 3-3 invasion. It is a territorial move that aims to take back the corner, but it cedes sente and influence in the form of a ponnuki to the invader. In the AI era, it is considered to yield an even result for both players on an empty board, but traditionally it was thought to be more of a situational move. In 2019, it was the fourth most common joseki played in professional games[2]. 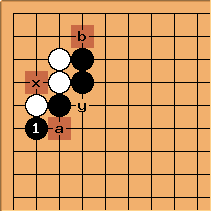 When to play the counter hane? 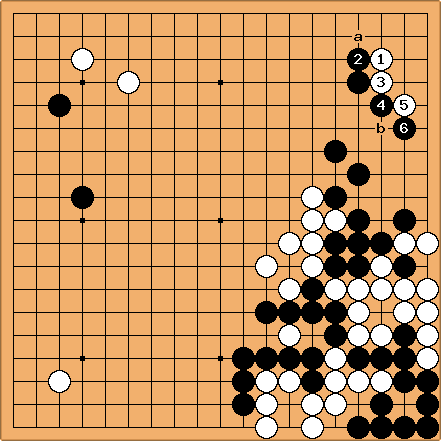 yuzukitea: The consensus among professionals and many strong players is that that "switcheroo ponnuki" (coined by Uberdude) is rarely ever good. Zhan Ying (2p) states that "after extensive research, it seemed as though there weren't any situations where the switcheroo ponnuki was good"[3]. The lifein19x19 forum thread "

Is the 3-3 double hane switcheroo ponnuki joseki ever good?" appears to have reached a similar conclusion. Aesalon? said that they went on multiple quests loading ~100 professional games in attempt to find situations where the switched ponnuki isn't a bad move, but they are extremely rare in professional play. This is especially the case in contemporary go, since 3-3 invasions are usually played relatively early in the opening.

In most cases, AI considers the counter-hane at a to switch sides to be a mistake. On an empty board, changing the ponnuki's direction is a five point loss in estimated score. It is extraordinarily rare for the alternate ponnuki to be worth the five points it loses.

Zhang Qiang vs. Zhao Chenyu (2019) is a rare example of a game where AI recommends the counter-hane at a to switch sides. In this game, we can see that the regular ponnuki arising from b would be extremely dissatisfactory, and there's hardly any way to imagine how it would be good by any stretch of the imagination.

Since b is eliminated as an option, White has no choice but to play the counter-hane at a. White is not precisely happy to switch sides (it is variation that inherently loses ~5 points), but in this case the conventional ponnuki is even worse. When presented with two bad options, you must pick your poison.

What if White really wants the corner? 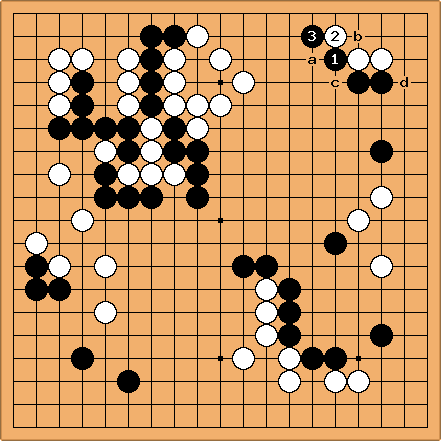 yuzukitea: Generally speaking, the outside ponnuki is better for White than the corner, but it is important to note that it is possible for White to live inside the corner if they so desire. There are in fact multiple methods for White to live small on the inside (often in gote), and several variations have been played by professionals throughout history.

Wu Guangya vs. Tang Weixing (2018) is a rare instance when AI agreed with White's decision to keep the corner. Here, the best option is for White to

atari at a followed by

connect at b. In this board position, Black cannot ladder the

stone and they also cannot save the

stone. Furthermore, if White continued with the regular ponnuki, they would be extremely overconcentrated due to White's nearby living shape on the top side.

While it is generally a poor idea for White to play for the corner territory, there could be extremely rare situations where a non-standard move is good.