a) in this diagram. Black is not enclosing the bottom right corner but playing on a somewhat larger scale. The idea behind the opening is that White at some time will be forced to invade somewhere in the framework that Black builds on the right, after which Black will use the attack on the white group to turn another part of it into territory.

is played at a. The high variant is more influence oriented, the low variant more territory oriented. Since at least the late 1990s, the low variant has been the most commonly played and has hence become synonymous with the "Chinese opening," without specifying "high" or "low," in contemporary usage.

AI's Response to the Chinese Opening

AI introduced the attachment at the 4-4 point against the Chinese opening. Accoring to Shibano Toramaru, which ever way black plays,

will become inefficient. The 4-4 attachment is effective against all varieties of the Chinese openings including the mini-Chinese. 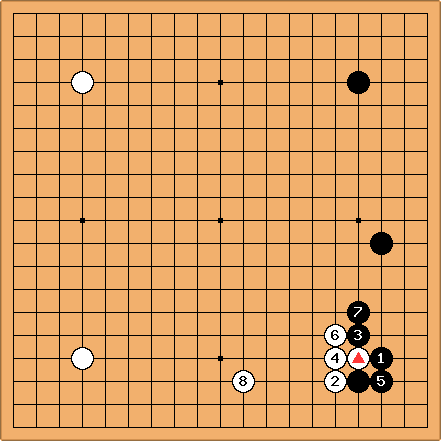 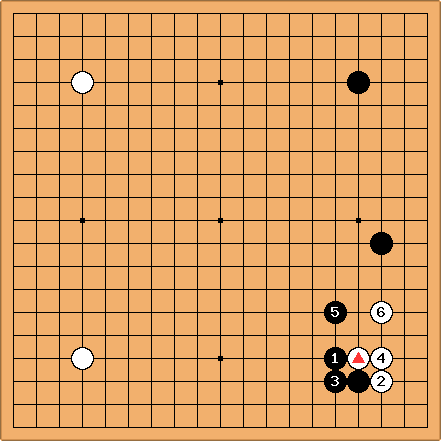 The Chinese fuseki has been very influential, leading to many further patterns being tried:

The Chinese opening is most commonly believed to have originated from amateur Chinese players in as early as the 1950s, where Guo Tisheng played it in 1951. However, it wasn't until the 1963 and 1965 Japan-China Go Exchange? matches, where Chen Zude played the opening numerous times as both Black and White, that it caught the wider attention of Japanese players.

Despite this, some Japanese players have claimed the opening was introduced to Chinese players by the Japanese before it returned back to Japan during the early to mid 1960s. For example, it was wrongly claimed that the first person to play the Chinese fuseki was Kawai Tetsuyuki in 1966, much later than official records show (see

this rec.games.go message (LINK BROKEN)). In an even more famous example, Kato Masao claimed in his book The Chinese Opening that the Chinese opening originated in Japan and was introduced to Chinese players by Yasunaga Hajime. Regardless, it can be seen that, at a minimum, the opening went through numerous exchanges between amateur Chinese and Japanese players, and even made an appearance in the 1961 Amateur Honinbo tournament when Harada Minoru played the high Chinese (according to Charles Matthews

A Dictionary of Modern Fuseki - The Korean Style