3-4 point approach from the wrong direction 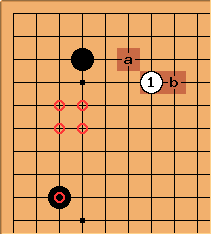 To make a kakari against the 3-4 point,

here is considered to be the wrong direction, because it does not hinder black in making a corner enclosure. The normal move is at any of the circled points.

is already on the board (a common situation, which occurs in the Chinese fuseki and the small Chinese fuseki), things are different: A kakari 'from the right direction' is now pincered automatically, giving black an advantage in this corner. Because of this, a kakari like

now becomes an alternative. Black making a corner enclosure may now be overconcentrated. 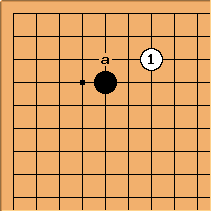 in this diagram is most common. The reason for this difference is that

here does look into the corner, while if the black stone were at a, it would be completely closed away from it.