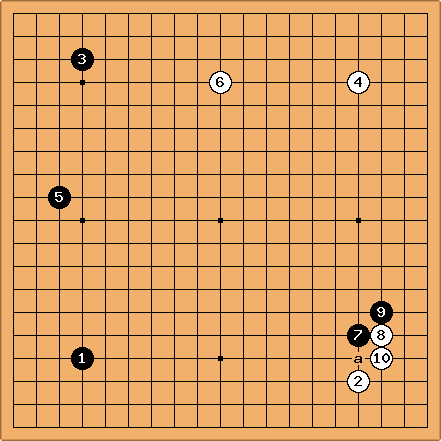 kokiri - i acknowledge that this is probably splitting hairs a bit but if i were playing black, I'd not really be happy with

is to be expected below and then the chinese fuseki on the left has no room to expand towards the right. I think that

Alex Weldon: I think this is probably okay, actually... the continuation restricts the expansion of the Black moyo on the left, but it also damages White's, in the upper right. Seems fair to me. 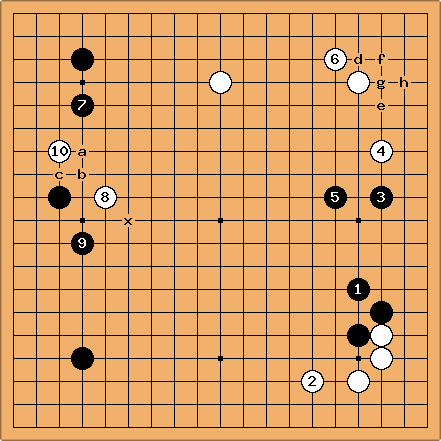 Klaus: All the moves 11-20 seem to be at least resonable!

secures points, but is this move urgent? If not, what about playing a kakari at

iff I'm not very good in this, so I risk a possibly stupid question (I understand that securing the corner might not be urgent, but let's assume for a moment it is): Does w6 really secure the corner (of course that's what I played it for) or is a 3-3 invation (or at e) still possible? Would d be better for sealing off the corner?

Basti Of course the question is not stupid. The problem is that one almost never has full security of one's corner territory. Even a shimari from a komoku doesn't create absolutely secure territory. There are really too many ways to go wrong defending the corner. Also losing the corner doesn't need to be really bad. Not only once I used the strength I got afterwards to kill a whole group of my opponent...

To get back to your question. Invading at f directly doesn't look very possible. g or h should kill it. I think the problem here is rather black 3 and 5 creating the possibility of e. If you want to prevent f at all cost you can of course play it yourself instead of 6 but you have to ask yourself if that is really effective...

follows the proverb: Answer the capping play with a knight's move He chooses the attacking side instead of teritory at a, which could be a good alternative. W0 leaves a weakness at b and I am not sure weather this can be called light. 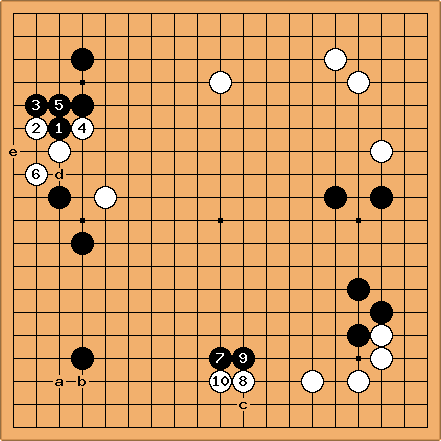 Basti I think the sequence from 1-6 is very questionable for black. He has made no more then 12 points in the corner but at the same time created an open skirt on the left and gave white a gote eye and some shape. As black I would go directly to 3 instead of 1.

Klaus you are right, that 1-5 is bad for black, but

might be too small for the moment. Tenuki is called for. Why not? If black want's to waste a move to capture here, white will have taken sente twice, which is great! By the way,

does not create an eye jet, and i don't even see a continuation which does. white needs d and e for an eye.

iff If white is to tenuki: Where should he play?

Basti Right, the eye is pretty questionable. a only creates an eye in ko. Still if white leaves 6 out black could turn the whole left into territory later by playing d himself. I agree with Klaus's alrernatives for 7. 7 on the bottom because it is a nice move for white as it is the most open area and only reasonable kakari. This was also my place if white wants to tenuki at 6. However I have the impression a would only help white if he had played at 7. 7 on the top looks ok to me too. Maybe it could be combined with tormenting white's left side group first?

Basti I'm not so sure about 8-10 but would probably invade at a imediately. As black has no prospects of territory on the left (due to the open skirt) he will probably block at b but as white usually get's sente after the san-san-invasion he can still go to 8 or c for example 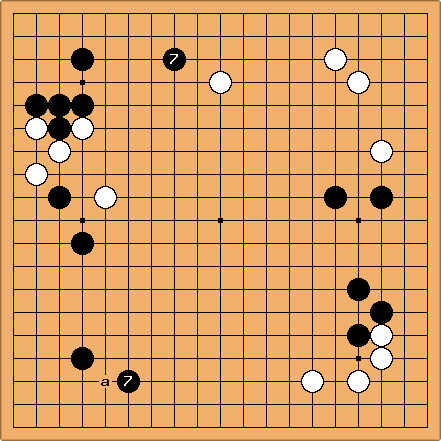 If Black opts for the lower 7 (next to a): Would that make a 3-3 invation urgent? Or would it be better to play somewhere at the moyo boundaries? I usually think in such positions "I have a large moyo at the top and a pretty large corner at the bottom, so I destroy the only big potential that black has left with an invasion and should win" ... but I guess it's not that simple :-) 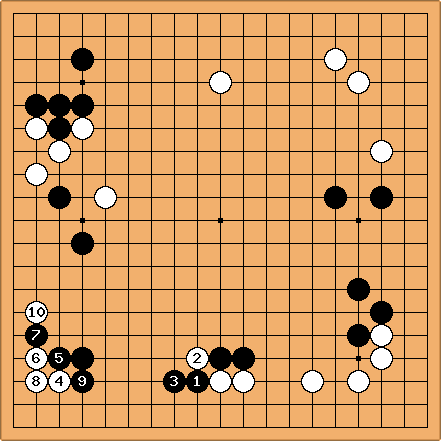