Owner of the "Boulder Go Club", the club for the players of Boulder county (in CO).
Subowner of the TeachingRoom.

I will start posting info on my study in Griffin's Study Log.

Here are some problems. I will add others over time.

Here is an ongoing game. If you want to play,please enter your name as white. Only one player as white and only one as black(I am black) please. Komi 6.5.

Spectrums: Could this be a teaching game?

griffin: There can't be 2

s,i have changed your move to

griffin: Sorry,I corrected your move (changed it to 6) but didn't play:).

griffin: Move 8: should be one point higher.It could also be a corner enclosure(shimari). 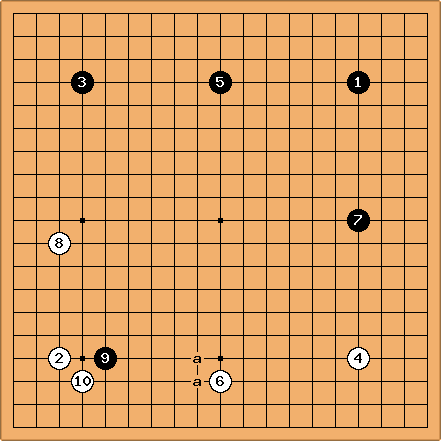 AJP: From what I've heard (read) white tends not to get a good enough result from playing the Chinese Fuseki, either high or low, but rather needs to set out directly to deal with blacks san ren sei. Even so,

since black still has room to make a two space extension on the lower side. This is why in the chinese

would be at one of the a points, were it to be played by white (which it isn't). The low position of

in the game also gives black what he wants, which is central influence. Now black can play either a shoulder hit or cap against this stone and black's moyo becomes too frightening. My $0.02 anyway. :)

griffin: I don't know if you are right about the chinese fuseki although it sounds reasonable but I agree with you that 6 was not a very good move.

Spectrums: Thanks for your imput. I love suggestions :D 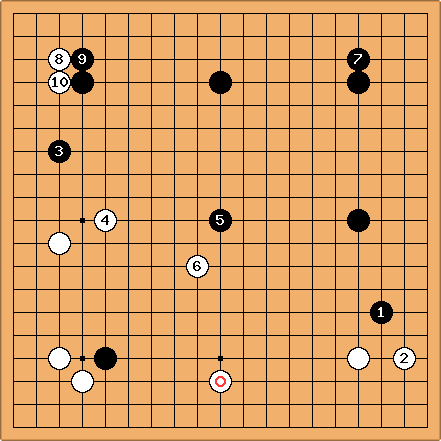 Bill: Brief comment. White's play is not very enterprising. Every White play from

in this diagram) to

here can be criticized for that. White has already fallen behind, as a glance at the board indicates.

Spectrums: That's why its a teaching game :D Thanks for your imput.

Griffin: Spectrums! You are white,not black :). 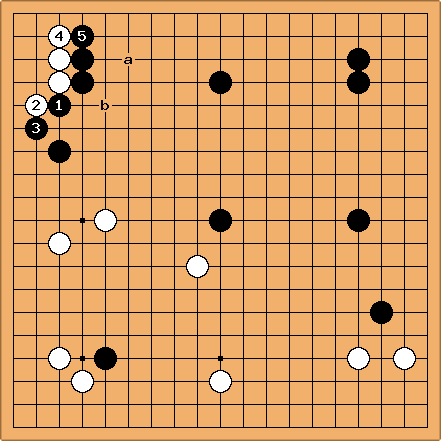 I will be happy to give anyone a lesson on the opening.Please Sign up in the Teaching Room. My current pupils are: