Beginners guide to the opening

Our appreciation of the opening has considerably changed since the AI revolution. The interpretation of that changed appreciation is developing. See Leela Zeros Opening Gospel. Still, much of the conventional wisdom given here still applies though.

This is a guide to the opening of a game of go, aimed at beginners and double digit kyu players. Stronger players are usually familiar with most of the principles here, although even for them it can be useful to review the material.

What area to play in

First, we will take a look at the general areas that you want to play in, and formulate a few rules about precedence of moves. All sections are summarized in a basic rule, numbered in order of precedence.

Start in the corners 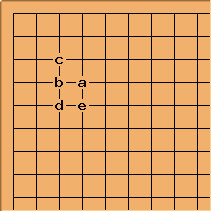 The first two are very general purpose moves, you can never really go wrong with them. The others are quite reasonable, but may lead to more complicated fighting earlier on.

When you play a symmetric move, like the 4-4 or 3-3 point, there is usually no urgency in playing another move in the same corner. These moves are said to develop quickly, because they allow you to focus on other areas of the board immediately.

With asymmetric corner moves, such as 3-4, 3-5 or 4-5, it is far more important to spend another move in such a corner. When you already have such a stone, you can use another move to make an enclosure. When your opponent has made such a move, you can make an approach move, which prevents them from making an enclosure. 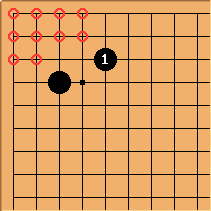 , Black has enclosed the corner, thereby laying a claim to roughly the

is a very common move, and is usable in almost any situation.

Rule 2: If there are no empty corners, try to make enclosures or to prevent your opponent from making enclosures. The 3-4 5-3 enclosure is fine in almost any position.

Play the sides next

When you've made an enclosure, or when you're developing quickly with 4-4 moves, the next place to play is on the side. Again, the presence of the edge of the board helps you establish your stones and makes it easier to make territory.

With the move at

, Black is laying a claim on the circle marked points. They are not his territory yet, but it will be hard for white to play in that area with much success.

When you extend from your corner stones, you are starting to build a moyo, a territorial framework. A move on the side can also serve the purpose of preventing your opponent from building or expanding a moyo.

Rule 3a: Play on the side to build frameworks by extending from your corners, or to prevent your opponent from doing the same.

Continuing in the corners

When you've prevented an opponent from making an enclosure, or when your opponent has prevented you from making one, you will end up in a situation where both players have a stone in the corner. From such a position, it is natural to try and establish a position for your stone, and your opponent will do the same. Here knowledge of joseki, set sequences of moves in the corner, can be helpful. From any such situation, there are usually a myriad of joseki available. Of course you cannot expect to be able to learn them overnight, and it is impossible to show all of them here. Learning and understanding joseki is difficult. We will therefore focus on some basic principles of joseki instead, that can help you understand joseki you encounter. 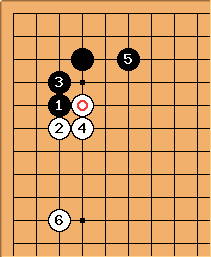 With the move at

, White has prevented black from making an enclosure. The sequence shown is one of the joseki available in this position. After

, both players have established a position for their stones.

Rule 3b: Continue in the corners by establishing a position for your stones.

Very early on in the game, both rules 3a and 3b may apply to the position. In this case, you will have a choice of several moves that follow those rules. To choose an appropriate one, it is important to consider the urgency of moves. Moves are urgent if they prevent your stones from being captured, or if they make a severe attack on stones of your opponent. As a general rule:

Joseki are set sequences of reasonable moves, which give both players a normal result. There are myriad joseki available, and it is beyond the scope of this article to go into them now. In the following section, you will find some general guidelines for choosing joseki.

The meaning of moves

The previous section gave guidelines for the area to play in. In this section we will look more specifically at the choice of moves available to you in such an area, and what their meaning is.

Moves are generally divided into high moves and low moves. This refers to their distance from the nearest edge. As a rule we say:

In general, during the opening, most moves are played on either the third or the fourth line, as those are the most balanced moves.

In general, the meaning of those moves is:

It is a good idea to try and build your game in a balanced way. Do not play all your moves on the third line, making only territory, but do not play them all on the fourth line either, making only influence. If you play moves 1-4 intersections away from each other, try to either combine high and low moves, or play only low moves if you need to stabilize stones. 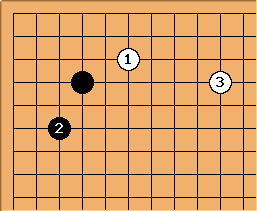 In this common opening sequence, both players have combined high and low moves.

If you play moves 5 or more spaces away from each other, it is also fine to play both moves high, as you may later add moves in between that balance the position.

This diagram shows san-ren-sei (where white has played moves

in the other corners). This is a common opening using only high moves. Later, Black may play moves such as a or b, which are low moves that balance out the influence by focusing more on territory.

Other common opening patterns, such as the Chinese opening, start out more balanced by combining high and low moves.