I've reworked (WME) the page completely. Many of the comments have been wiped out in favor of stabilized content. Please restore where needed. --Dieter

PS: The discussion below is not discussion about a page IMO. It deserves a BQM-like entry.

How to respond when W activates dead stone? 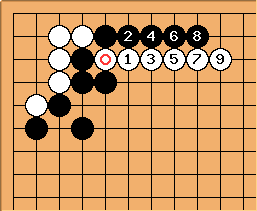 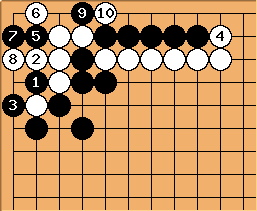 aLegendWai: Now I show you why it is seki when B only gets 5 stones in the second line.

Charles Hang on - is

aLegendWai: So do you have any better ideas?

aLegendWai: After my trial (briefly), I think 2 kinds of results are possible - seki or ko. Please anyone finds a way to make B win / make W win. Please amend my materials. Thanks. 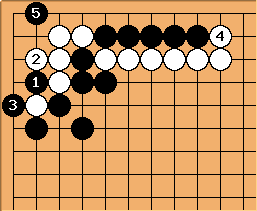 Rich: What happens for 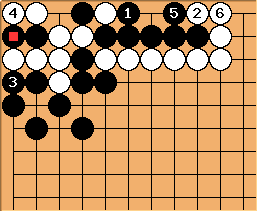 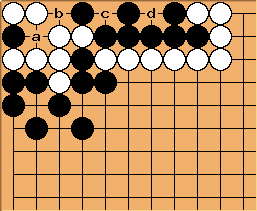 B forms an eye in the side.

On one hand, W has to fill up its inside liberties (from a to d) before capturing B. However it would be suicide because B will capture W when W filled up "a" and "b". It loses the capture race.

On the other hand, if B wishes to capture W, it has to fill up its inside liberties (from c to a) too. However it would be suicide to B because W will capture B when B filled up "c" and "b", It loses the capture race.

So it is seki.

But B gets a very good ko threat which is never exhausted. When B plays at "b", it threatens to capture W, W has to respond at "c". Then B re-captures the W stone. This will return to the same state as the diagram "Result - Seki in the corner" shown.

However every time B activates this ko threat, B loses by 1 point (because W gets 2 prisoners. B gets 1 during the process).

(PS: I was originally confused by the diagram "When W extends 03" that B won capturing race. Thanks so much for Rich to point that out. It is really helpful if the website itself allows the upload of sgf file. So this silly mistake will hopefully happen less frequently. :D)

What Rich said previously:
B cannot win the capturing race, unfortunately; this is a seki. While he has a strong group on the left, I can't help feeling this is a bad result from a 3-3 invasion.

aLegendWai: I feel W is in great favor however. Reasons:
1. Seki means both parties gain no point (under Japanese rule). Altho W can't get any; B still can't get any. (W gets compensation due to some other reasons)
2. B's side gets complete destruction. If it happens in B's framework, B feel like dying!
3. W gains excellent wall (and influence too)
4. It is very difficult for B to capture the W's wall

Even if B extends and form 6 stones in a row and so gets the corner, the result is still considered to be favorable to W. So when the W dead stone activates, the best remedy B can do seems to forgo the corner.

Rich: I disagree; Black has a very thick group on the left, the white wall still has no eyes (and presumably black stone/s to the right) and can be chased or sealed in as black sees fit. W's influence is offset by black's, IMO. 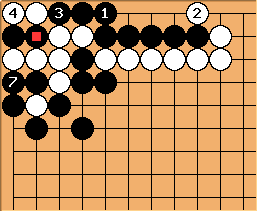 one point left of

Rich: As black, I would be grateful if W tenukis after

aLegendWai: Definitely. How happy B would be! :P

Rich: However, if white has any support in the centre, instead of

in "When W extends 01", he can settle his corner group and black may be unable to capture the cutting stones.

aLegendWai: Possible and good idea :P At that time, B will suffer a lot. 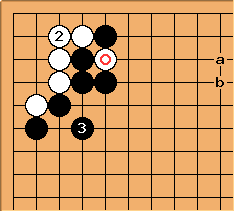 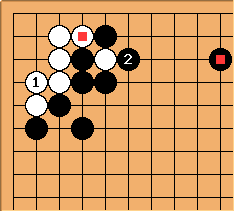 will be observed. However a much better way is to avoid this variation (ie avoid playing

) in the first place when W notices the presence of

Resistance against taking the corner

What if white plays like this instead? Does he live? If so, then why is this variation not mentioned elsewhere in SL? 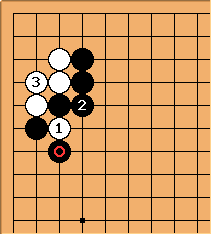 Bob McGuigan: If Black wants to attack the white corner stones he has to do something first to prevent White's capturing one stone.

is a natural move if the ladder is favorable. Now it is easy for White to live in the corner. Several moves work, for example: 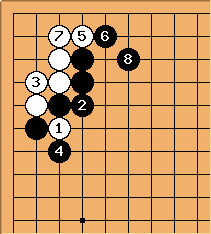 If WHite plays tenuki after

then Black can try to kill the corner, but it can become complicated (see Kyu Exercise 1) and anyhow Black gets a favorable result even if White lives.

How is it favorable to black? It seems fairly similar to the result after the main line of the 3-3 point invasion (without double hane), except that white has less space towards the bottom. But black played the double hane to try to get the corner, and white ended up with the corner anyway. So the difference is enough that it's always better than taking the corner for black?

Bob McGuigan: Black does not play the double hane to capture the corner. He can only do that if White allows him to and in some variations White can force him to take the corner. Maybe it's better to say that Black has a chance to take the corner. For some of the issues here see this page: 44Point33InvasionDoubleHane As for how this differs from the usual non-double-hane variation of the 3-3 invasion, in that case one side is open at the edge but in this double-hane variation White is sealed in on both sides. If White does manage to escape being completely sealed in it may involve crawling a long way on the second line, making Black stronger and stronger on the outside, which is advantageous for Black.