The information on this page is meant to be introductory in nature. Stronger kyu and dan players are advised to look at 4-4 point 3-3 invasion joseki instead. 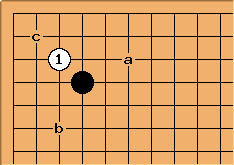 Many weak players fear the invasion of

in this diagram. Playing Black, they have the idea that their corner territory is taken away, and are, in a sense, correct. After

, it is White rather than Black who will make territory in this corner.

The 2-2 Point Invasion of a 4-4 point at c is typically incorrect, and can be considered a trick play. The idea behind this move is that Black would end up with a heavy group by trying to kill the invasion.

Nevertheless, Black should welcome this invasion. Black shouldn't see this move as an attack on Black's territory; the 4-4 point is not meant to take the corner, but to make thickness and seek a balance between territory and influence. The white invasion at

is separated from the rest of the board by the black stone on the 4-4 point. By playing correctly Black will get a strong position. Because of this, stronger players play

only if the position on the edges is such that a white stone at a or b will come under attack.

White, for his part, should resist the temptation of invading here too soon. The general principle is that White should seek to invade at

the move before black would protect the area. 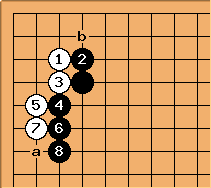 Black will invariably answer with

, on the other side). To choose which way to block, the general rule here is to block on the wider side, seeking to maximise the usefulness of the outside strength black is building.

ensures that White's corner will not be too small.

is an important move, preventing white from making progress out into the centre.

to avoid Black playing at the same point.

is the most usual continuation, although the severe double hane of

at 7 is played in some circumstances.

Usually crawling along the 2nd line is bad, but

is important to prevent Black turning here in sente. White should resist the temptation to continue crawling at a. Every extra point white takes, is far less valuable than the outside strength that Black takes.

erikpan: Just a quick question: Is there anything wrong with 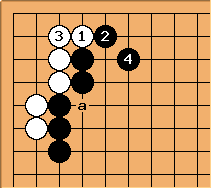 Next, White plays hane at

, and the joseki ends with

White has sente and a few points in the corner, but Black's wall is like a block of concrete, controlling a large part of the board.

This result is regarded as good for Black locally, but is often White's best choice, nonetheless. Later in the game the cut at a might be a problem for Black, see Squeeze for more discussion how and when to defend. See Hovercraft for Black attacks on the corner and the proper defenses.

Can White change the order of play here? 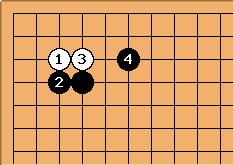 With the knights jump black can get sente, if the upper side isn't very important.

or a depending on where friendly stones are nearby. The one-space jump at b and the diagonal at c can also be used, though they are seen less frequently. 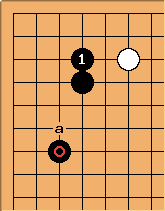 This shape is also seen in situations like this, where White has played an approach move, with the same intention of preventing the 3-3 invasion

The diagrams above cover the most basic moves, but unsurprisingly, (this is Go, after all) there are more complexities and subtleties that one can investigate:

If black seeks to get more by playing at

in the diagram below, then he risks disaster... 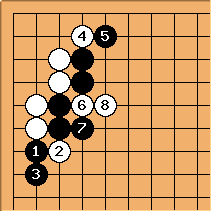 in this diagram) is overdoing things. After 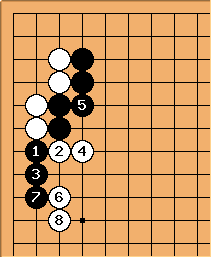 White could also attack the black stones at the left with these moves. Either way, White has destroyed Black's thickness, and has good chances of getting even more.

Charles I've seen a pro as White play directly at 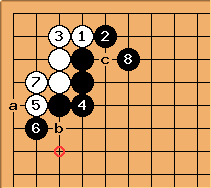 Here White swaps the order of play, turning at

before playing the hane at

The danger is that Black may be able to answer

rather than the usual

. This lets Black shut White into the corner with

(particularly as 'a' is Black's sente). White ends up with a smaller corner than in the joseki, and Black may be in a position to make territory on the left. The disadavantage for Black is the aji of the cut at 'b'.

B tries to kill the invasion 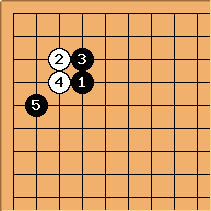 One idea from 10x10CornerGame1 is to let white get the L group in the corner, but not a second eye or connection on the outside. 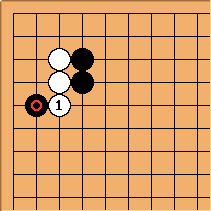 is more than adequate: it makes

into quite a bad play [5]. White shouldn't fear this. 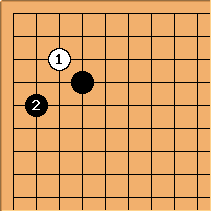 directly, in reply to

is a more refined version of this technique. There are a few contexts in which it is strong. 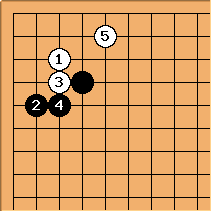 Charles There is no need to play 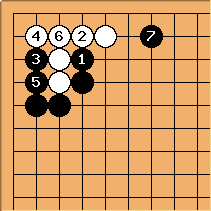 Black can make it unobvious how White lives up to 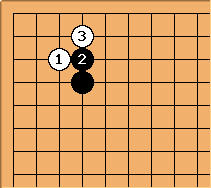 erikpan: Just a quick question: Is there anything wrong with

? I've had some success with it, admittedly at the 16k-ish level. When black is already not too strong outside it usually seems possible to live small and steal some territory - unless someone can provide some alternative variations for black? 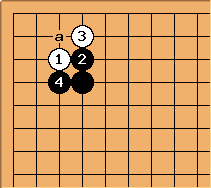 , is a good play for Black. Not only does it block White in this direction, it threatens a.

There is more detail at 4-4 point 3-3 invasion joseki and the following pages: 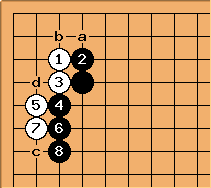 mat Very often I ask myself if a 3-3 point invasion still works in the presence of more than one black stone. I've set up a page to discuss which of those work and which don't: 3-3 Point - When Does It Work 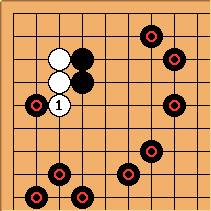 BruceWayne You are right normally, but as the description says, if B has a very strong wall such as the marked stones then W will die.