Note: The following is a deviation from the 4-4 Point 3-3 Invasion Double Hane joseki, with

beginning the deviation from the common lines of play.

I often end up in positions roughly like this, and want to keep the corner rather than trade for a ponnuki....

What are the pros and cons of White playing at a, b and c? I usually play at b but not sure if that is usually best. i am about a 12k I think. 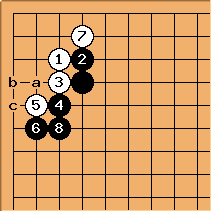 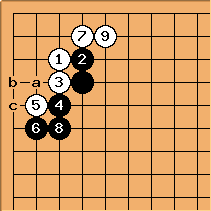 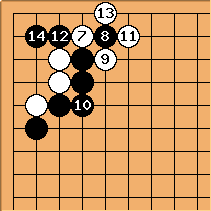 Tapir: So if you play

to emphasize the top side, it is generally a good idea to follow up on it, when Black doesn't answer with

in your diagram was already answered twice so in a way did work efficiently already. (Compare this with Bill's diagram, don't you feel that White there is at least as good as this one?)

Thanks for the comments. Yes, i like Bill's extension at 9.

In some other cases though developing much on that side is not an option, and making living shape is important and still not sure which of a, b and c is generally best in that case. Here is an ugly shape in a 13 x 13 game where i played white and was not sure about that choice...I'm pretty sure his 8 was a mistake, but I needed to live in the corner. Is the d analogous to Bills move above still best? Wether it is or not, i thought i needed to play one of a, b or c to secure my eye shape. Which would be considered best? I chose b as I thought was if he responds to b i would keep sente but at the cost of leaving some aji i guess, whereas if he responds to c i need to play a in gote... 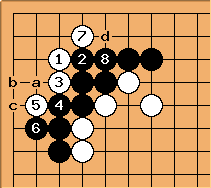