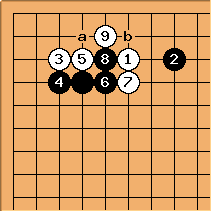 is not a usual joseki move. Should 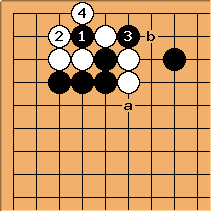 The correct cut is this

, which applies the saying cut the side you don't want, and is also the typical sequence. Next,

may be played at either a or b, and the result is favourable for Black. See 4-4 point one-space low pincer invasion, block for more information. 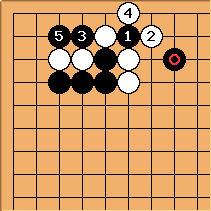 here is the wrong cut, and

happily capture the cutting stones. After

captures the corner, the

ends up as a misplaced stone. Note that White has sente now.

The remainder of this article uses tewari as an analysis tool to explain why this result is inferior for Black.

Tewari on the wrong cut 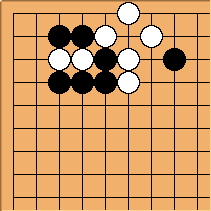 This is the reference diagram, where we want to show that Black has an inferior position. Note that White has sente.

In tewari, we use a different order of moves to arrive at this very position. 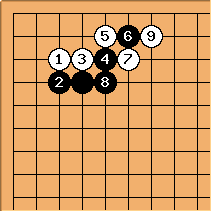 We use the 4-4 point 3-3 invasion double hane for the tewari analysis. 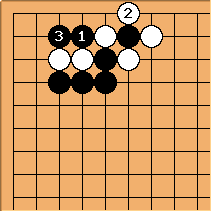 Black chooses to cut at

ends this joseki. Both sides are about equal. 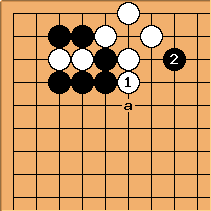 might become a big move for expanding towards the center. But instead of playing elsewhere or to start a pushing battle at a,

is an absurd move and played in the wrong direction, leading to

being a misplaced stone. Note that it is now White's turn, and this position cannot be good for Black.

Through tewari, we arrived at a different ordering of moves that leads to the same position as that of the reference diagram. Hence, we conclude that the wrong cut in the starting position in the preamble (a variation of the 4-4 point one-space low pincer invasion, block joseki) leads to an inferior result for Black.