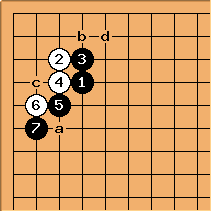 Imagist: This is a common joseki resulting from a 3-3 invasion under a hoshi stone. In the common variations for

at a and b, black can forcibly retake the corner while giving white a ponnuki along one of the sides in exchange.

My question is: what if white cannot benefit from a ponnuki, and instead wishes to keep the corner? What is the best way to do this?

xela: If black is so strong on the outside, then maybe

is not the best invasion, and white might consider playing at

or at d instead? It's hard to say without seeing a full-board position. 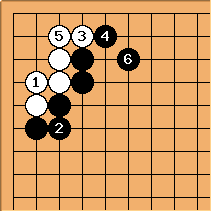 Imagist: This is the best continuation I could come up with. This seems very good for black. The only thing I see going for white in this situation is sente. 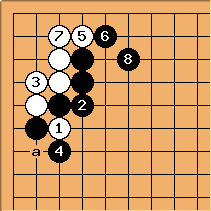 xela: If white is determined to keep the corner, I think

is still a good idea, because white will have the chance to play a ladder-breaker later (or maybe a).

Imagist: I see, an example of play kikashi before living. 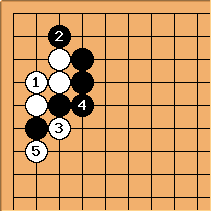 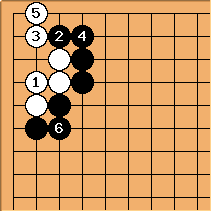 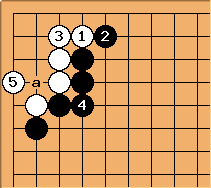 is usual to retain the corner. 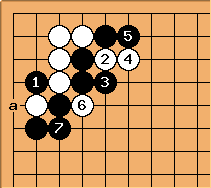 something has to give.

Imagist: What gives after

at a). Am I missing something? (A way to capture 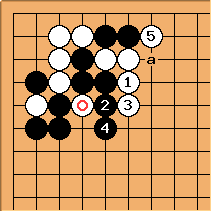 Imagist: Nevermind, I got it. I wish I could read.

Herman Hiddema: Alternatively, you could play 5 directly if you want to keep more aji in the marked stone (if black plays at

to force a, white has the option of later playing at 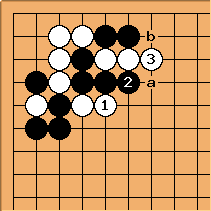 Imagist: This seems like it could be better in some situations. If black a, after white b,

Bill: If this ladder works or

has aji, I am not sure why the ponnuki isn't OK. 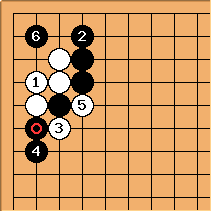 Bill: If the ponnuki is not good for White, there is a possible problem with

. Black may be able to play

. In this variation, if

are safe, things are difficult for White. And even if Black plays

somewhere else, White cannot make two eyes in the corner.

Alex: This is an example of the general principle that it's impossible to live at 3-3 (or just about anywhere else) if escape into the centre is not a valid threat (because the area is completely surrounded by the opponent's thick stones). It always surprises me how many SDKs and even amateur low dans aren't aware of that.

However, if that's the case, Black has other ways of preventing two eyes that will usually be better than this double-hane anyway.