A move is described as slow when it puts too much emphasis on the stability of one's own stones at the expense of development, or if it tries to undermine the stability of opponent's stones, which the opponent can resist and play elsewhere.

Slow a term more commonly used in the opening and middle game, when speed of development matters. Towards the endgame, where all areas have been developed, the term small is more common.

Depending of the level of play, a slow move can be a mistake or an affordable choice. Since the AI revolution there is even more emphasis on speed of development. What used to be an affordable choice at the professional level may now be considered slow. 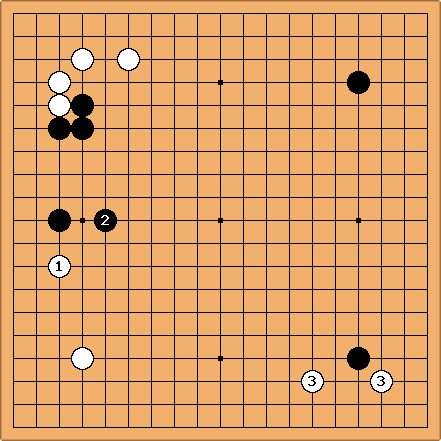 Aftern the joseki in the upper left, White's

is a little early in approaching the Black group, as the other corners are still covered with a single stone. For Black to respond with

is considered slow. Next, White can play in the lower right corner with an approach or a 3-3 invasion. 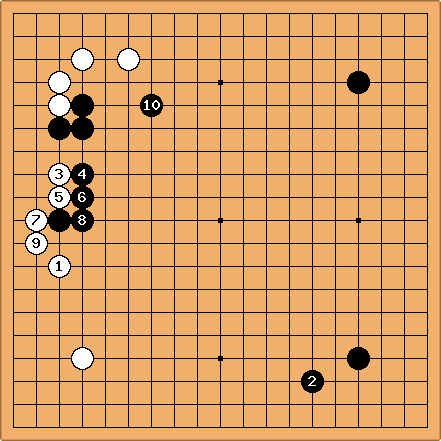 is considered fast. Now White can indeed sweep away Black's territory and base with the sequence

Black creates (strong) influence towards the centre. The position is even. 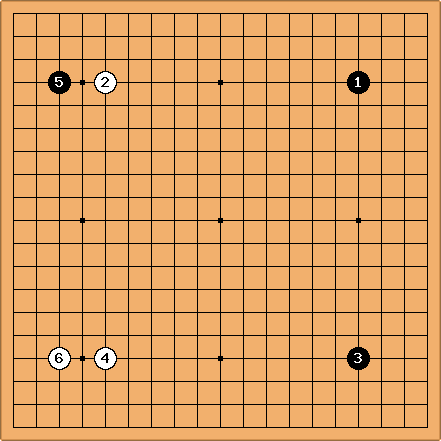 "was a little slow". His recommended continuation follows.

Note: when evaluating the position with KataGo,

is the preferred move by small margins. It's not slow by KataGo's standards. 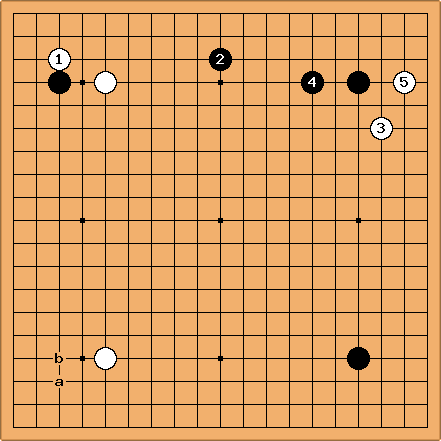 instead of responding in the top left corner to get some work out of his nirensei.

Note: KataGo believes that after

Black should invade at A or B in the lower left.

Let me try to explain a bit. The shimari in the bottom left corner does nothing to address Black's nirensei. White's play in the top left corner does, because the normal joseki continuation gives White an extension on the top side, which thwarts Black's normal development from the nirensei. Therefore Black does not play the usual joseki, but extends to the top side, anyway. At this point, the top right corner becomes urgent. (Although Go Seigen does not discuss the play, I expect that the wariuchi on the right would be slow, too.) 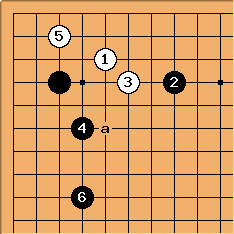 was popular among Japanese pros around 1970 and earlier, but went out of favor for being "too slow". Current professional assessment is better informed than it was then, but the move may still make a comeback. It is too early to say that it is too ineffective. However, regardless of its efficacy, the kosumi is slow. 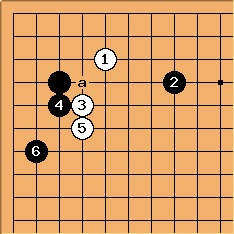 is more active. After

in itself is a little passive; fighting with a is more active.

Another option for White is to ignore the pincer of

and play elsewhere immediately. That is considered fast 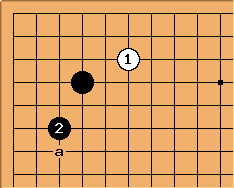 Before Go Seigen proved the virtues of

, it was regarded as too slow. The ogeima reply at a was usual as it was considered faster.