A wall in Go is similar to its natural counterpart, a long group of stones that separates parts of the board. It usually is difficult to cut and can have a lot of influence.

It is important to understand that defects and flaws in a wall, for example cutting points or the opponent's possible peeps, make a big difference to its value in fighting. You may consider that the wall builds territory, but in practice it is normal that it makes a framework first.

Here is a common situation involving a wall. It is a result of a 3-3 point invasion: 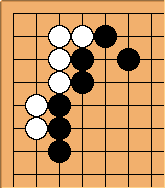 While White gets the corner, Black builds a wall with a lot of influence on the upper side and the center.

This wall requires expansion of Black's formation across the top side.

The correct way to use walls in go is an important aspect of strategy. Proper understanding requires the concept of thickness. The value of a wall depends very much on the extent to which it can be used to construct a framework, or to attack. If neither of those plans applies, the wall will not be so useful. Indeed a wall can become a weak group quite easily, if it is made in an inappropriate context, or neglected