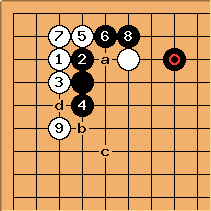 in response to Black's pincer

is usually intercepted at

avoids being locked into the corner, Black usually plays elsewhere although local moves are available too, such as b or c.

at d is an attractive looking hane at the head but is a mistake. [2]

Reasons for connecting underneath 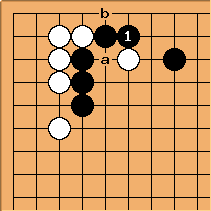 After AlphaGo, the choice of

over a became the standard. The advantage is that White now cannot play at

, either to connect her stone or cut off Black's wall from the rest of his position on the top, and the hane-connect of White b is not sente in the yose. The disadvantage is the possibility of the white cut at a.

Increasing influence & checking from the side 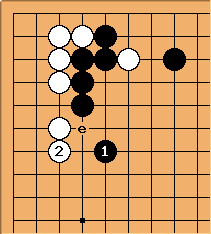 , Black extends his influence. Before the AI revolution

was considered honte. Nowadays, it is considered slow and White would rather play elsewhere. 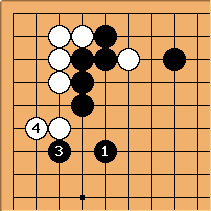 If White does not answer

. Before it was considered painful for White to allow Black this exchange in sente, but still it was seen e.g. Cho Chikun (Black) against Kobayashi Koichi in the 1999 Kisei title match. 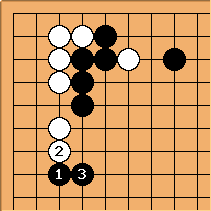 is rarely played immediately. Nevertheless, it is a common manoeuvre for Black, as a follow-up.

, White has sente, but Black has confined her to the corner, and now has strength on both sides and towards the center. 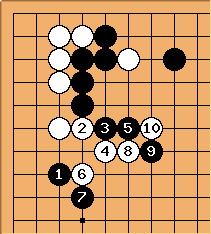 The alternative for White is to run into the center with 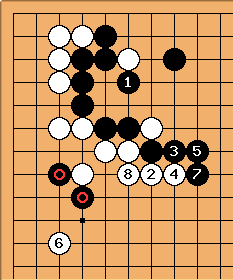 Black patches up his shape with

White has set her sights on the

makes black thick in the center. 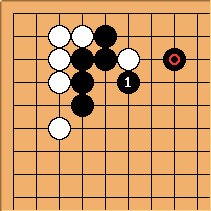 is not a good move with the one-space low pincer. The

stone is now too close to Black's wall.

Hane at the head 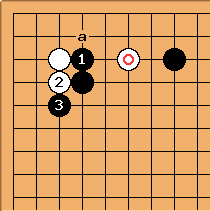 The hane at the head

feels natural but it is generally a mistake when

is in place. White's best next move is the hane at 'a'.

an article about this shape that analyses it in some depth. 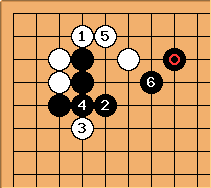 aims to link up with

is probably even a better result for White.

White gets territory and sente. Black influence and cutting aji. 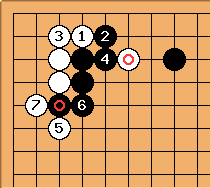 insist on cutting off

then White has the clamp tesuji of

. If Black draws back at

. Compared to the normal joseki, Black has made the extra exchange of Bb for

- which is aji keshi. 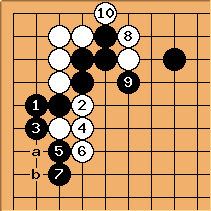 If Black tries to resist with

. One possible follow-up is shown. If Black does not play at

(but for example at

), White wins the semeai after White at 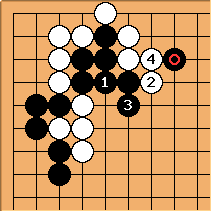 Black has been forced into a clumsy shape, while

has been cut off and blighted. The four white stones are far from captured yet. 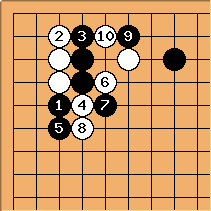 Many amateurs have learnt to answer

because if Black descends to

, either capturing three stones as in this diagram or capturing

and making territory at the 4th line. 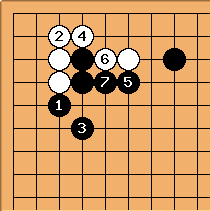 However Black can counter at

and gets superior shape up to

, trumping White's corner territory. Compared to the proper countermeasure Black is much better off here.